Back from the States, via Toronto, and straight into the London speed of things which is considerably quicker than the Kansas speed of things. I did a BBC-TV shoot for a programme about banned records, specifically the BBC’s ban on ‘A Day In the Life’. The fact is, in 1967, the BBC were extremely unlikely to play a track such as that anyway as their rock ‘n’ roll coverage was useless and the majority of young people listened to the pirate stations. However, they succeeded in banning the pirates a month after Sgt Pepper was released so it was all down to people like John Peel, who reluctantly went to work for the BBC, to play the more experimental tracks. We did the shoot at the Green Carnation on Greek Street, one of the many clubs in Soho that I’d never been to before.
Then on Sunday, June 8, I was interviewed on stage at the Stoke Newington Literary Festival by Thurston Moore. He is very knowledgeable about the counter-culture and the Beats, but I was surprised, and flattered, by how much research he had done which included visiting the site of the old Indica in Mason’s Yard. I signed a lot of copies of my Burroughs book. Lots of familiar faces in the audience including Martin and Kate who come to all my gigs, and a lot of Burroughs fans. It was a good evening, sold out, and we all had dinner afterwards. There’s a nice community feeling in Stoke Newington; it’s a pity it’s so impossible to get to with no direct tube and buses that take an hour from where I live. 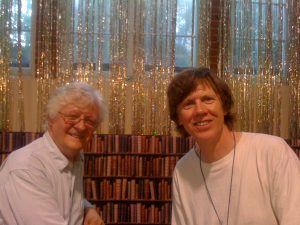 For those of you who missed the Burroughs Centennial conference at New York University in April (most of you) thanks to Alex Wermer-Colan the proceedings can now be viewed online: talks and interviews with John Bennett, Ann Douglas, Oliver Harris, Jed Birmingham, Charles Plymell, Geoffrey Smith, Anne Waldman, Regina Weinreich, Jan Herman and yours truly. Click here.

And to show how in touch with everyday life I am, here’s a picture of me with my son Theo down the pub on Father’s Day! 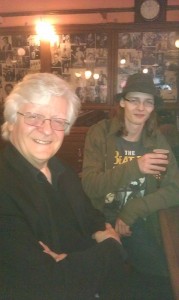 With Theo at the French Pub, Soho