First Mickey Farren, then Felix Dennis; my generation is falling away. I had known Mickey since 1967, when he made an appearance at International Times and eventually finished up editing it. Felix made an appearance at around the same time, when ECAL, the company set up in the basement of Indica Books to distribute underground newspapers and psychedelic posters was not doing very well and Oz magazine sent him around to sort out the finances (or rather, he sent himself around to sort things out, no-one at Oz had any more clue about finances that we did at International Times). Felix thrived and by the eighties, he was making so much money he had to move to the USA as a tax-exile. I was there too, though not for the same reason – I was writing a biography of Allen Ginsberg, and was there to interview him and his friends, as well as to go through his journals and correspondence. Rosemary and I often went out to his country place on the ocean front at Norwalk, and would cook for us all, with Felix providing the wine. On Christmas Day, the ex-pat Brits would all gather at Mickey Farren’s house down by the Holland Tunnel. His partner, Betsy Volk, would begin the turkey but usually needed a bit of rest before the cooking process was complete and I would take over, making sure it wasn’t burned to a crisp. Felix provided the wine and port, Pheobe, Lemmy, and a variety of other Notting Hill scene members were usually present and one year Felix even managed to find some crackers for us all to pull.

Mickey and Felix were always fun to see together. I remember one lunchtime, just the three of us, at the Groucho Club where black pudding was on the menu. We were at a table in the centre of the back brasserie. Felix, speaking loudly, as always, remarked, ‘Ah I see they have black pudding. The best wine to have with black pudding is Echezeaux. It’s here on the wine list but it’s terribly expensive. Fortunately, ‘and here he raised his voice even higher, ‘fortunately I have loads of money. Waiter, two bottle of Eschezeaux please!’ The room went completely silent, the amazed diners all staring at Felix as he beamed contentedly around the room.

I usually avoid funerals. There is no time for private reflection with all the figures from one’s past materializing all around; conversation is forced, one has to remain respectful, in some cases even respectable. However, my son Theo and I went to Felix’s. Felix was his godfather. We knew he was dying. He told me so not long after his diagnosis and back in November last year he didn’t expect to live beyond February. The last I saw of him was at his house in Dorsington. I took a snap of him in his favorite armchair in the Old Manor. 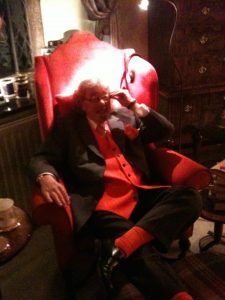 Felix at The Old Mannor

He left for Mustique the next morning in a private jet. He told me he had said his goodbyes to New York, and would never see it again, and that he intended to stay in his Caribbean paradise until the doctors insisted that he return to the UK to die. Rosemary went out to see him there in the Spring for a couple of weeks and was able to say her goodbyes. Her video of him waving goodbye is quite fitting. He left it until the last minute and only survived two more weeks on his return.

Felix was buried in his own graveyard; a part of his newly planted forest dedicated to his friends. The weather was changeable, small squalls of fine rain, broken cloud and patches of sun. Felix rested in a wicker coffin on a trestle between two life-size statues of sheep made from sparking plugs, part of his enormous collection of eclectic objects- d’art. A wide path had been mowed through the fields leading to the site from his estate. Jon Snow commented on the incongruity of it in his speech. After some toasts we all followed the coffin through the fields. 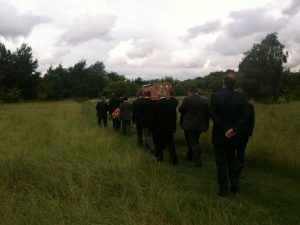 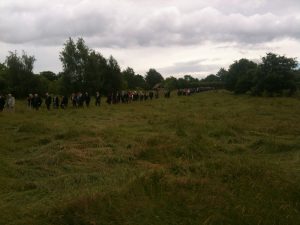 It was quite a long way for the pall bearers to shoulder the load and they had to have a break. We passed the marker over Mickey Farren’s grave: a bronze looped leather belt. 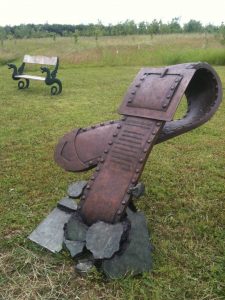 Felix’s grave was on the highest ground, next to a huge boulder and a one and half life-size statue of himself by Andrew Sinclair that he had commissioned. For once Felix was taller than everyone else. We waited, almost in silence, for some time until his mother, in a wheelchair and unaware of what was happening, finally caught up with the cortege. In a brief ceremony Felix was lowered six feet into the ground. 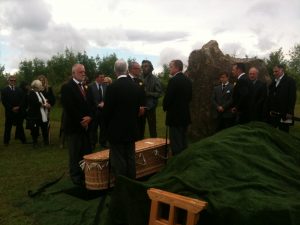 Felix (centre) presides over his own funeral

Food and drink awaited us in a marquee outside Highfield, the wooden pleasure-palace he built, then buses returned us to London. I went back to Richard Adams’ place with Alan Marcuson, Richard from Oz, Alan the founder of Friends, myself from IT, for an evening of underground press reminiscences during which we frequently raised our glass to Felix.