Rosemary and I were in Paris for the opening of the The Beat Generation show at the Centre Pompidou on June 20th. I had initially hoped that, because of the show’s location in Paris, it would show the Beat Generation as an international movement, not the insular group as depicted by the terrible Whitney Museum show some years back. That one, by arranging its exhibits according to East Coast or West Coast, virtually left out William Burroughs who wrote all his books abroad in Mexico City, Tangier, London or Paris until the age of 60. I remember going round it with Allen Ginsberg who said he had never heard of half the West Coast painters whose work was heavily represented there. I’ve rarely seen him so angry, and he had even been consulted on the show.

The Pompidou show was ill conceived from the start as one of the curators – who pulled out early on – thought that the Beat Generation was a Los Angeles art movement centered around Bruce Conner, with an outpost in the Fillmore (not the North Beach) district of San Francisco (there were a few small galleries there.) This of course was the same mistake as the Whitney show had made, only more-so. The remaining curator, Philippe-Alain Michaud, brought in Jean-Jacques Lebel, who had known the Beats back in the late fifties at the Beat Hotel, and Rani Singh from the Getty, to try and salvage the show. A group of us are preparing unofficial reports at Jean-Jacques Lebel’s request and once they have been delivered and discussed I will put a detailed criticism of the show up online and on the Reality Studio website where more people will see it. 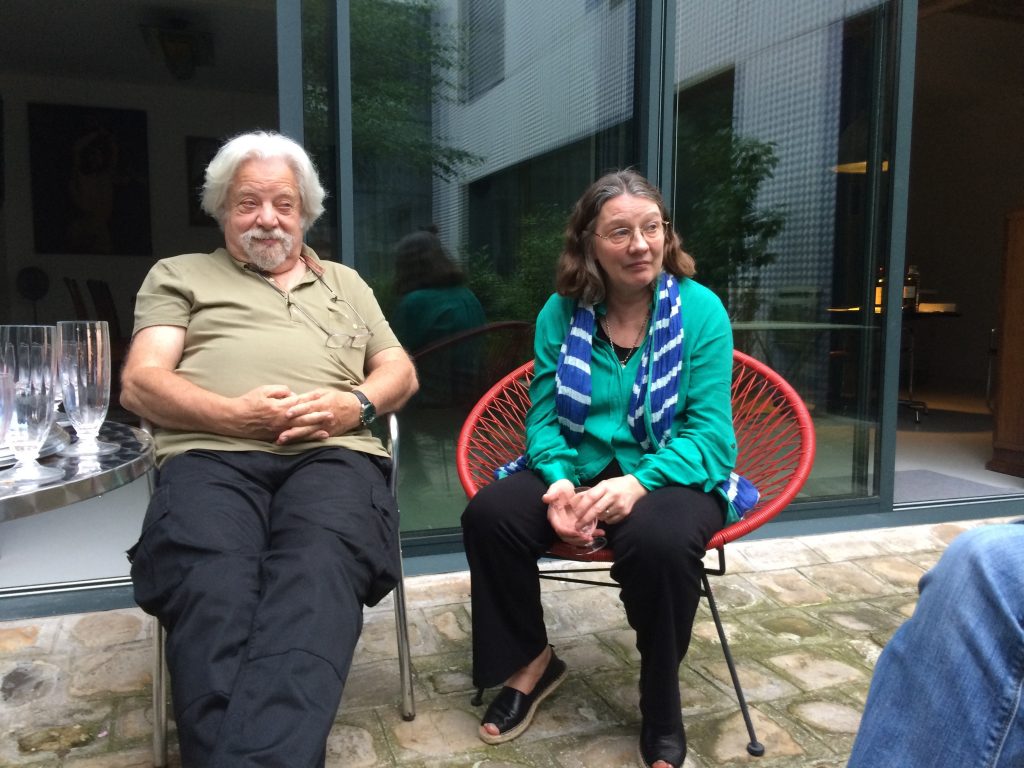 In brief, I think the show is a terrible missed opportunity and only really worth seeing if you know something about Beat Generation history already. In that case there are some fabulous things there, but there’s also a lot of irrelevant stuff, often displayed large, that is nothing to do with the Beats. The original manuscript of Howl is there, on public display for the first time, but most people missed it because it is hidden away in a corner with some irrelevant movie playing next to it. That’s worth seeing. The original scroll of On the Road is there, in Paris again. The scroll has been on the road more than Kerouac ever was. I’ve seen it before in both London and New York. Still it is great to see, particularly the end which was chewed off by Lucien Carr’s dog. Other beatnik items include Kerouac’s sneakers, Brion Gysin’s jumper, and a bunch of old typewriters who belonged to no-one in particular but are there to confuse you. 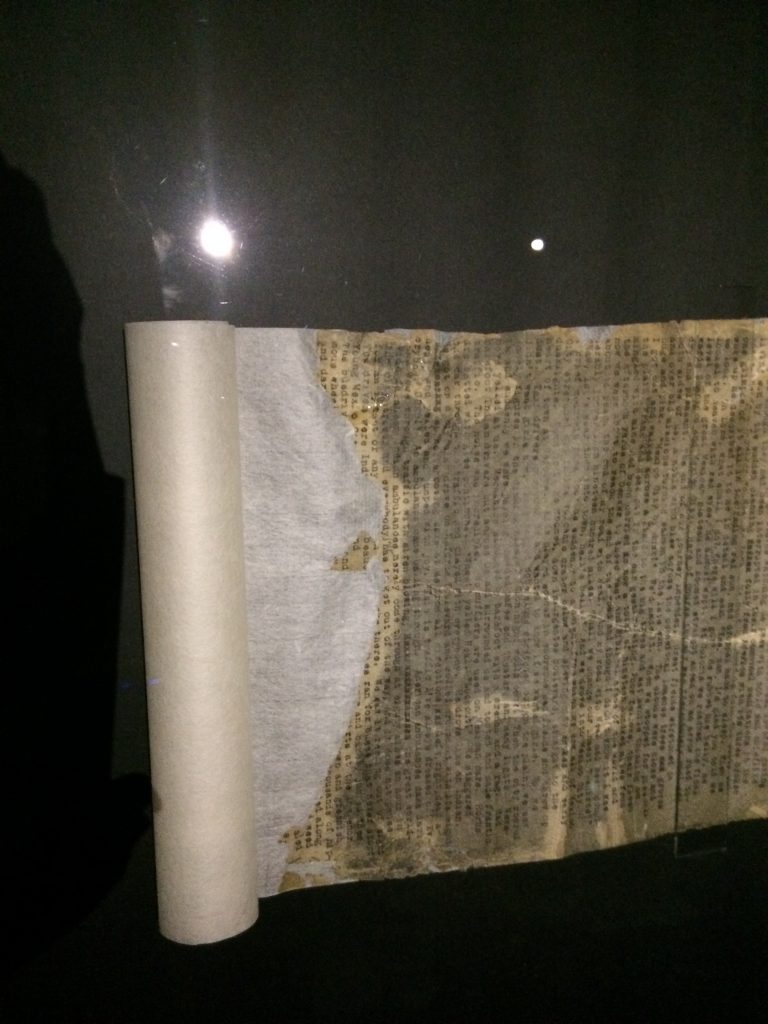 Lucien Carr’s dog ate the end of On The Road 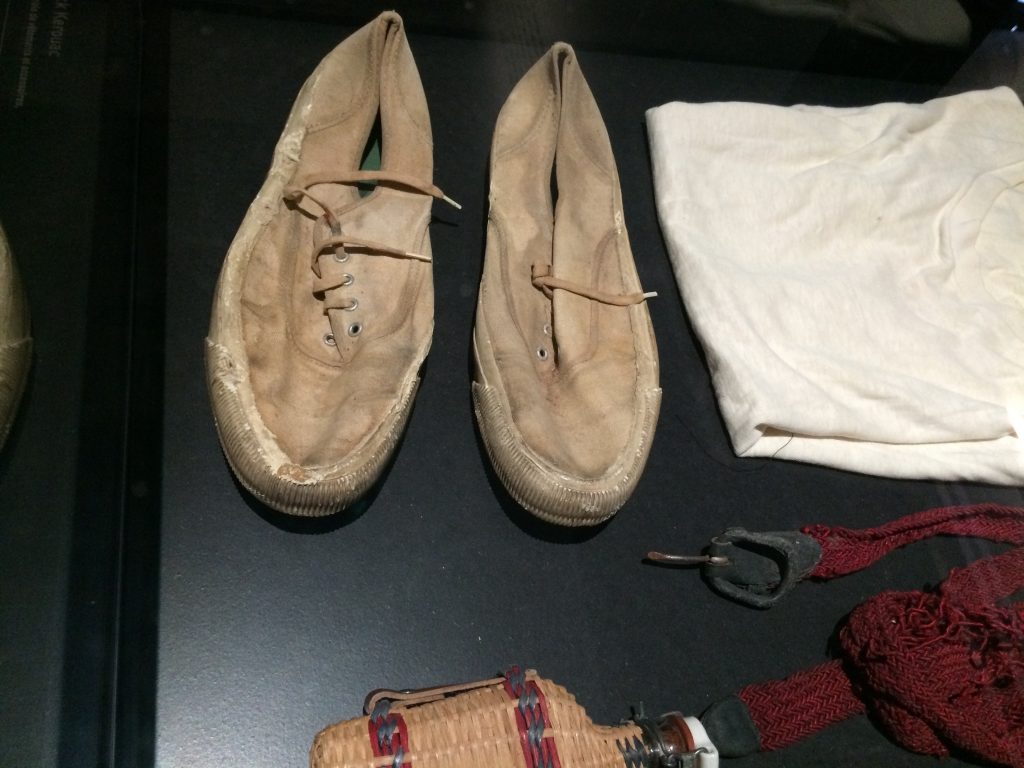 Jean-Jacques seemed exhausted by his efforts and so, no doubt were the others, as it is a very large show. I didn’t get to see Philippe-Alain, but Rani Singh was there and Yuri Zapancic who handles Bill Burroughs’ visual output for the William Burroughs Estate was there, representing James Grauerholz. Peter Hale, who runs the Allen Ginsberg Estate, flew in and out on a busy schedule looking as fresh and filled with energy as ever. Frank Rynne and Yvonne, Regina Weinreich, all the usual Beat Generation suspects were there. There is a big fat catalogue, in French, with some great illustrations. The show is travelling to Germany where there is a plan for ZKM to do a revised catalogue in English, so it might be better to wait for that if your French is non-existent like mine. 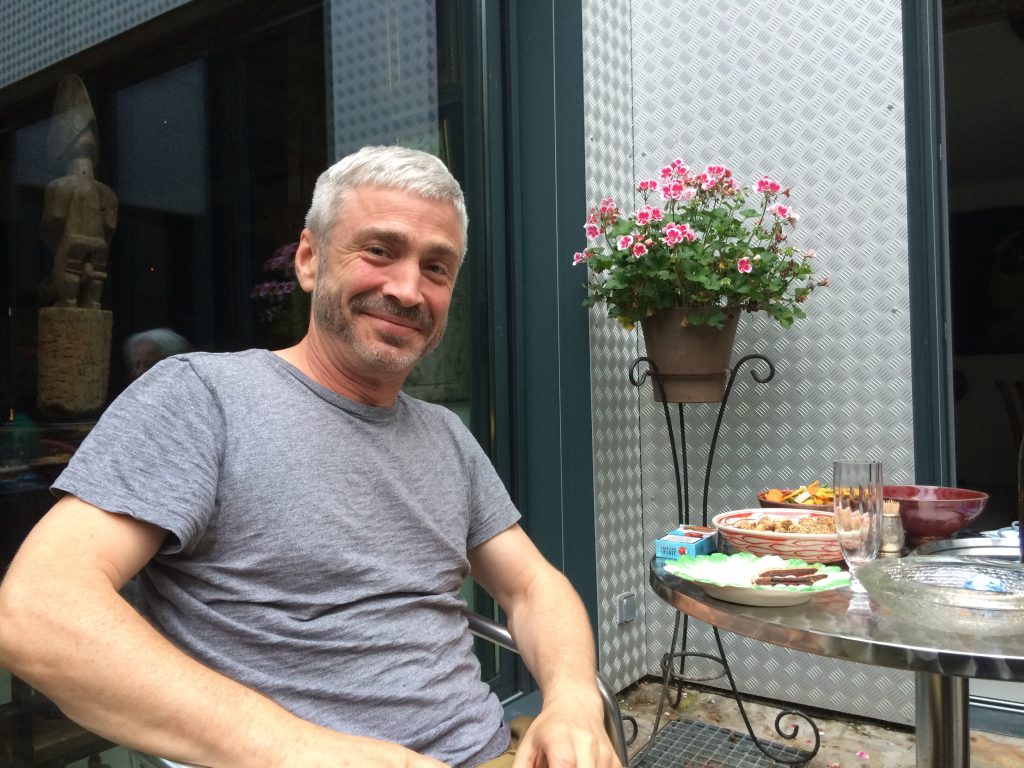 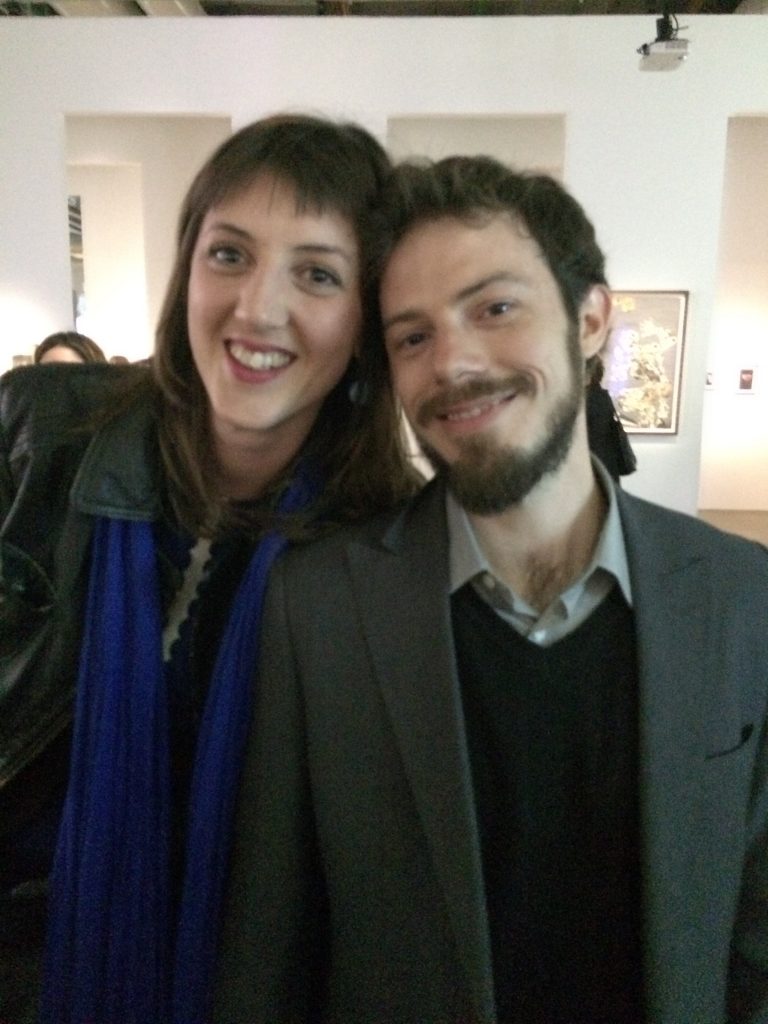 The saving grace of the show is the audio-visual side. There are some fine films and interviews there. Though, again, not well displayed – the best Ginsberg presentation in Paris is the in the Velvet Underground show [see below] – but there is an interview with Allen by Jean-Jacques Lebel that I liked. 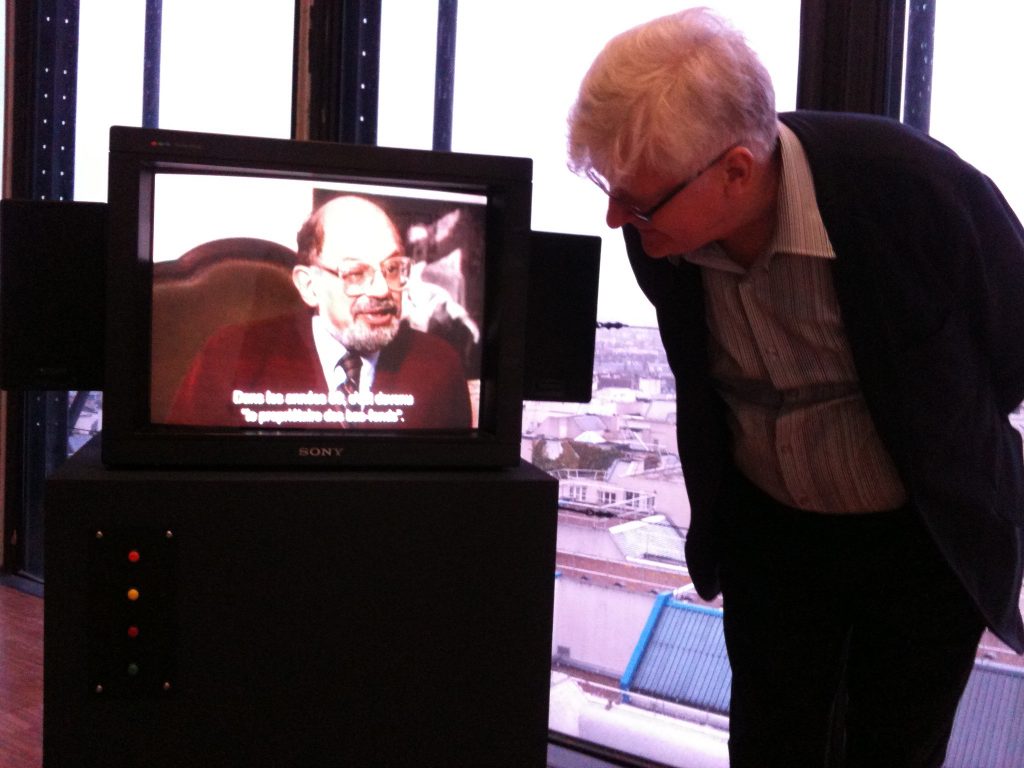 Never mind, maybe a major US museum, or the British Library can be persuaded to do a proper overview history of the Beats in a few years time. At least there were two other great shows on in Paris. Apollinaire at the Musée de l’Orangerie (till July 18), and the Velvet Underground at La Villette out by the Peripherique. Apollinaire’s friendship with Picasso was illustrated with endless drawings, postcards and items of ephemera. The show contained much of Apollinaire’s art collection, a fabulous copy of his book Alcools with the cloth jacket painted by Sonia Delaunay, the marionettes Alfred Jarry made for use in Pere Ubu; a bust by Zadkine; wonderful early work by De Chirico, Braque and so on. The drawings and letters were the best part for me; I could have stayed there all afternoon.

As we were in the Orangerie, we saw one of the world’s greatest treasures, Monet’s Water Lilies: eight enormous panels in two rooms, one on each wall. It had been years since I’d seen them but they are breathtaking. The paint is so roughly applied that any five foot section of it would look like an abstract painting: a Philip Guston or Joan Mitchell. At a distance the paintings come together on the picture plane to recede in space, with the water lilies taking their place in perspective. He prefigures Rothko and Twombly and soars above them both. No contest. 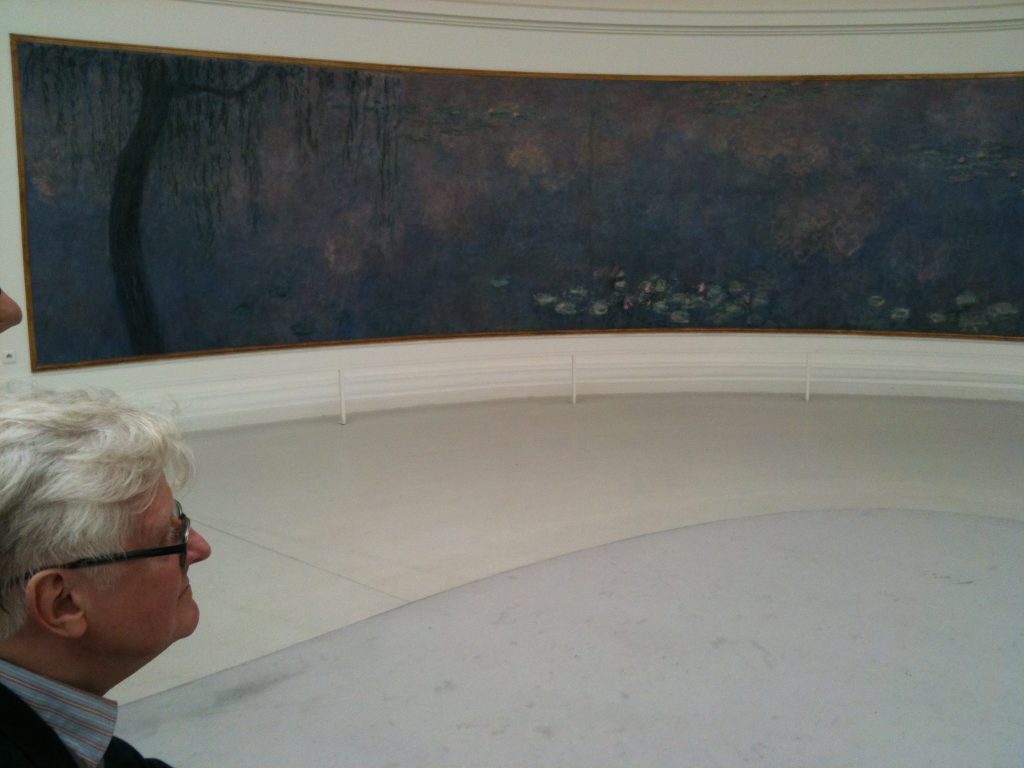 The Velvet’s show (31 August) is big on context; perhaps too big. You walk in the door and are hit by a wall of videos all showing sixties icons: JFK, Castro, Monroe, familiar footage flipping by on scores of screens. After only three or four steps you are IN the sixties. The next room consolidates the effect: underground newspapers – including International Times and Oz – have been enlarged into banners and posters, vitrines are filled with underground papers and magazines, the walls covered with photographs of the period: McDarrah’s photographs of Beat Generation Greenwich Village, for instance; Allen Ginsberg smiling out and being interviewed. The presentation of Ginsberg is possibly better here than at the Pompidou where they have inexplicably buried him in a dark corner. Another video shows a concert by The Fugs with Ken Weaver taking one of the lead vocals and Ed Sanders another. There are art books, Fluxus documents, the full history of Piero Heliczer’s Dead Language Press, an overload of information about Andy Warhol and the Factory, until, at last in the next room you get your first glimpse of the Velvets.

Who would have known there was so much documentary evidence of their every move? Posters, flyers, interviews. Each phase of their career is dealt with chronologically, with headphone sockets everywhere and a listening/viewing pavilion where people lay back on mattresses and watch the band. Whereas the Beat show suffers from too little information and too few information panels, this show overdoes it. Every character – from Barbara Rubin to Taylor Mead – has its own information booth with a biography posted in the form of a newspaper with photographs. I can see how the design was inspired by Warhol’s Exploding Plastic Inevitable: a true sensory overload, but for a museum show it is a bit too much. However, it is possible to stand back from the context a bit and concentrate on the band, even if it means avoiding studying all the proof copies of album sleeve notes or out-takes of photo shoots. It is still a terrific show. 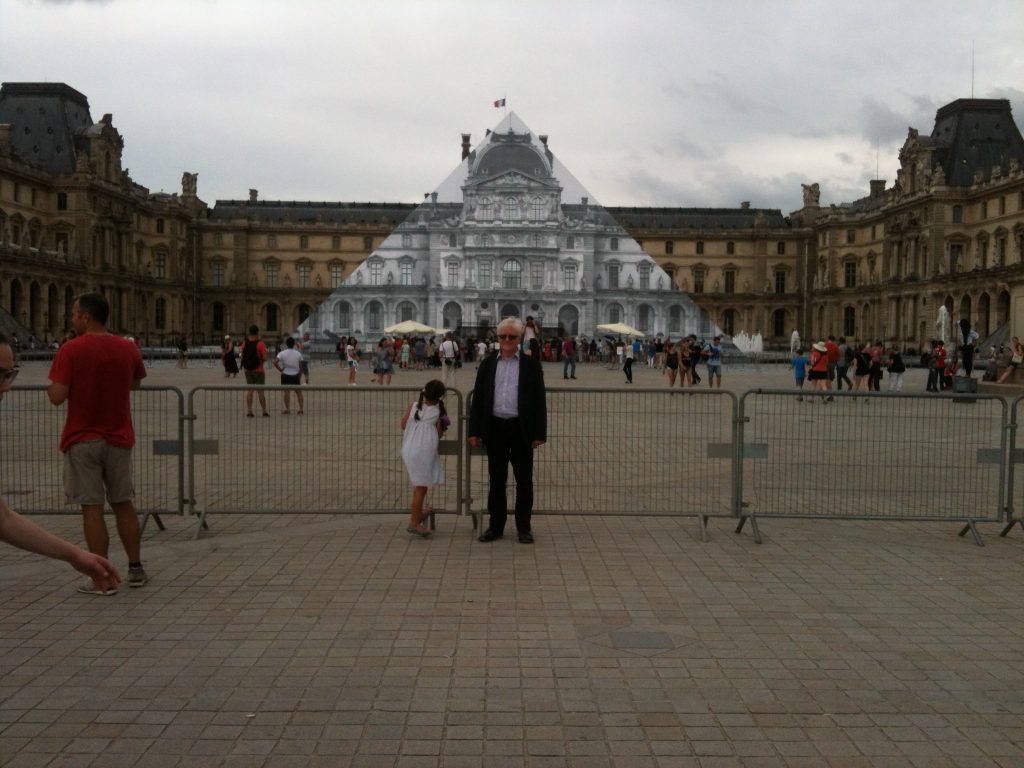 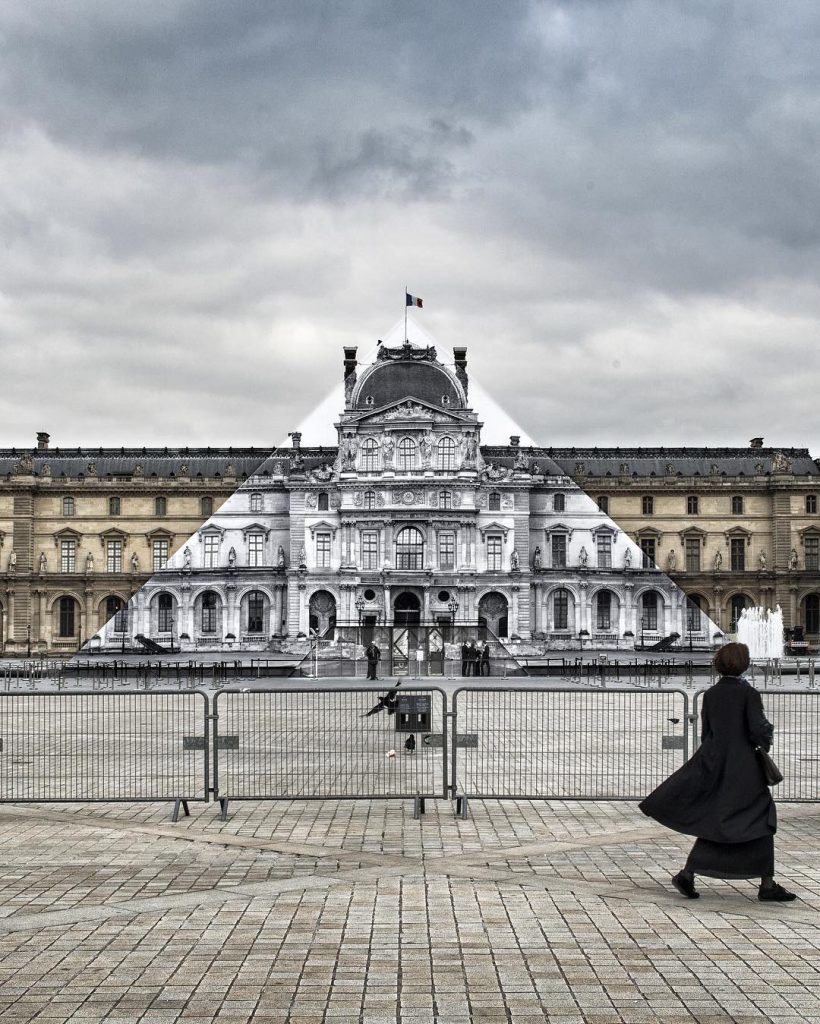 How the photo should be

We naturally went to see JR’s installation at the Louvre Pyramid. It was raining, but still fun though the rain made it less tempting to find the exact angle so that the pyramid fits exactly over the Louvre and disappears. Rosemary took a better one of me than me of her.