The upholstered seats on the Piccadilly Line appear to breath, inflating when the train picks up speed and subsiding when it slows. On the fast track between Terminals 123 and 5 at Heathrow they breathe rhythmically like a row of athletes doing exercises.

At Frankfurt airport a row of glass cubicles are designated as ‘Smoking Area’. People stand there like exhibits in an aquarium and one can’t help thinking of the pictures of Eichmann in his glass cage. At the Frankfurt airport train station there was a long empty platform and on it, a yellow line had been painted to designate a square as the ‘smoking area’. About 15 people stood, crowded together, smoking.

In Karlsruhe I find that in restaurants wine is ordered by the .250l pitcher and paid for by each individual, Euro 4,40. The same applies with meals when you are in a group. Each dish has a number and with a large table they have a chart with a square for each seat in which they write down everything you order. Everyone lines up orderly afterwards in a neat queue to pay for their meal.

Views through to back courtyards, war damaged walls often incorporated into new buildings, washing lines even in the city centre. Trams everywhere, no buses in downtown area. Bikes ridden on pavement on the outside lane, which is painted darker, or made from darker materials. This way each street has a bicycle lane at very little extra cost. New tramlines were being installed; they become ordinary railway tracks when running through areas between roads at the side of a park or past backyards or in their usual place on their own ribbon of greensward down the middle of the wide highways.

Karlsruhe is very spread out; it is supposedly the model for Washington DC, and everybody drives. There is no really discernable centre of restaurants, cafes and bars, but there is a commercial area of big shops where the only crowds in the city can be found.

At the Hotel Allee in Kaiserallee cold meats on a chilled plate in a cabinet; Germans eating huge breakfasts of cereal or porridge followed by a plate of meat and cheeses, fruit salad, apple juice and coffee.

At dinner with Peter Weibel, Rainer Metzger, Christian Brandslutter, Andrei Ujica; the latter making a film about the Beatles at Shea Stadium which he regards as the day ‘when romanticism went mainstream in America.’ He compared this to Rousseau’s defining moment when he pay floating in a pond and realized that his thoughts and actions were not pre-determined; that his emotions were his own and therefore his actions should be also. This moment Andrei feels was repeated on a mass scale at Shea. He calls it a fictive biography, no talking heads, and is searching for original footage. I wish him luck in dealing with Apple. It’s a very European approach to the subject.

Breakfast at ZKM. Peter Weibel brings a newspaper to the table and opens it to a page with photographs. He placed his i-pad over one of the pictures and it checked the net for similar pictures and almost immediately sourced a film clip of the meeting and began playing it. Peter was delighted. I suspect he rehearsed it before joining us but it was certainly impressive. 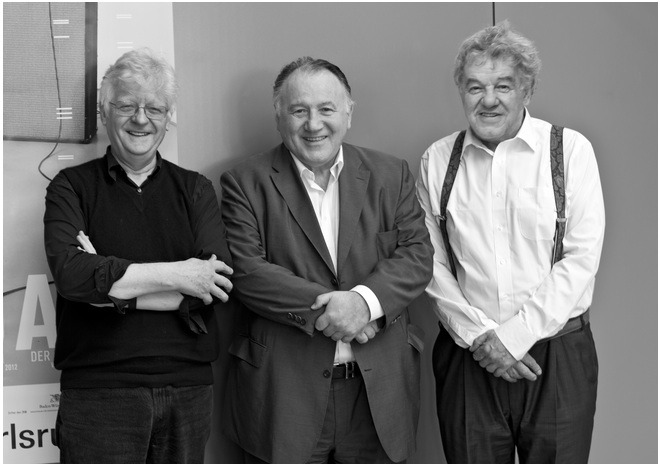