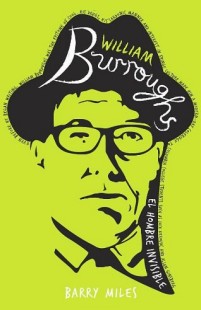 Bill Burroughs seemed the logical book to do after my Allen Ginsberg biography as I knew him and I had only just finished researching the basic Beat Generation story and the facts were still fresh  in my mind. Virgin Books were preparing to launch their new Virgin Modern Idols series. They had a list of about 20 ‘idols’ from Miles Davis to Dennis Hopper and thought that Burroughs would fit well into the series. Virgin was going through a lot of changes at that time and shortly after we signed the contract and I had started work, the series was dropped. I think my book and one other were the only titles to survive. I had a new editor who wanted it to be simply an introduction to Bill’s work. He didn’t last long. Then came another editor who exclaimed, ‘That’s not what we want at all!’ He wanted a biography. I added the requisite biographical material but pointed out that a full-length biography would be twice as long, and would require renegotiating the contract, as it would obviously take considerably longer to write. I went through eight editors all together, each one wanting something different but never staying more than a few months as Virgin seemed to be bent on destroying itself. Bill was kind enough to grant me an interview and to read the final manuscript and make a few suggestions, but the book is sort of uneven, still being essentially an introduction to his writing, but with biographical material added. It’s a literary biography, but I was never fully satisfied with it because it was too short, however Allen Ginsberg liked it and thought I did a good job on making cut-ups intelligible to the non-specialist reader. More than 20 years later I was able to write the full-length biography I always wanted.

‘There can be no more effective introduction’ – Q magazine