You are here » Books » The British Invasion 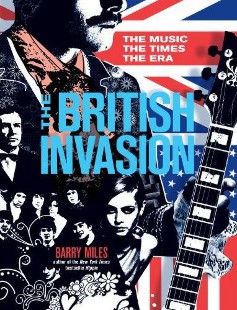 ‘Rock ‘n’ roll had died in 1958, was resurrected in 1963 in Britain, and returned to the States in a different form. It had the same youthful energy and teen spirit, only this time it had a British accent. More than a revolution, this was an outright British invasion on America – headed by The Beatles and The Rolling Stones – and the people dug it!’

This was a commissioned book, but it is a period of culture history that very much interests me. Between 1964 and 1967, British music, films, and fashion transformed American popular culture. The Beatles had the top five places in the charts; Time magazine put Swinging London on its cover; British actors, directors, and movies won a string Oscars; James Bond finally replaced Dickens as the English stereotype, and hemlines across the world rose high up the legs of lithe girls who wore Mary Quant mini-dresses. The book details the British Invasion from its roots to its legacy; explores American bands of the period who ‘fought back’; surveys fashion designers and models; and tries to set the darlings of stage and screen in context.

It was only published in the USA.