You are here » Books » The Beat Hotel 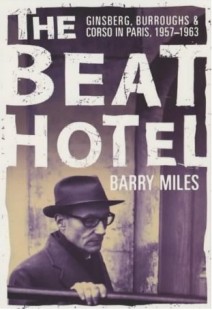 The Beat Hotel is the story of last great bohemian hotel in Paris and describes an overlooked part of the story of the American Beat Generation. The Beat movement was international, and much of the key activity happened abroad. William Burroughs, for instance, wrote all of his books outside the USA until he was in his sixties. The Beats had their beginning when Allen Ginsberg, William Burroughs and Jack Kerouac shared an apartment in New York in the early forties: this is the story of the second wave of their activities, when they were actually writing. This time Allen Ginsberg and William Burroughs were joined by the younger Gregory Corso, (Kerouac never visited the Beat Hotel, contrary to many reports) but it was the daily contact of all three of them that created the excitement and ideas that made the Beats into more than just a new incarnation of the Lost Generation. They were the precursors of the hippies, who took the majority of their ideas and philosophy from the Beats.

Many of the ideas, such as the significance of  ‘widening the area of consciousness’ through drug experiments and psychic experiments; the advocacy of free love on a large scale as a social force for good; the questioning of the consumer society; the questioning of all forms of authority, of patriotism, of nationhood, all came from the Beats and was largely communicated through their books. Many of these were written at the Beat Hotel: Burroughs wrote some of his most important texts there. It is where he completed The Naked Lunch, wrote The Soft Machine and part of The Ticket That Exploded. It is where Allen Ginsberg began Kaddish as well as created some of his most anthologised poems such as ‘At Apollinaire’s Grave’ and ‘To Aunt Rose.’ It is where Gregory Corso wrote the poems in The Happy Birthday of Death, including his notorious ‘Bomb’, which was shaped like a mushroom cloud on the page.

In the book I described Brion Gysin’s invention of the Cut-Up technique, which Burroughs immediately took up and ran with, and of Ian Sommerville and Brion Gysin’s Dreamachine; the only work of art you view with your eyes closed. I’ve described Ginsberg and Burroughs’ meetings with Duchamp and Céline as well as everyday life in the ‘anything-goes’ hotel. What happened there was more than just a few writers exchanging ideas: the cut-up technique was extended by Burroughs and Brion Gysin, into a whole philosophy of life and Gysin’s room became a centre for many psychic and drug-fueled experiments, (often very amusing). It was a life-changing experience for many of them. I tried in the book to give a detailed picture of bohemian life in Paris in the late fifties-early sixties, to show the key roles of the English Bookshop and the Mistral Bookshops, to describe the lives of the other inhabitants of the Beat Hotel – students, artists models, poets, ex-pats – who often got caught up in the Beats’ experiments and lives, sometimes with disastrous results. The survivors, many of whom I interviewed for the book, regard their time there as magical.

‘The Beat Hotel is a look at a place that ‘gave the spirit of Dean Moriarty and the genius of Genet and Duchamp a place to dream together of new worlds of a glass of vin ordinaire’  – San Francisco Chronicle.

‘Barry Miles waxes poetic about the Beat Hotel, a regular Beatnik frat house on the Left Bank, where Burroughs was inspired to finish his Naked Lunch and Ginsberg commenced to Howl.’ – Vanity Fair

‘Barry Miles’ book is the first to focus exclusively on… how important and artistically rich this brief period in Paris was… an impressive chapter in contemporary American literature.’ – The Boston Book Review

‘Setting for fecund artistic creation and the usual feral Beat experimentation and excess… it was all a portent interzone of deep culture, unvarnished self indulgence, and unbridled creativity.’ – Philadelphia Weekly

‘A savvy and intimate portrait of the Beats during their most prolific and creatively adventurous period… warm, lucid and alive.’ – San Francisco Chronicle

‘The dingy stairwells, the stinking chiottes, the stark rooms with their naked bulbs and sagging beds, come to life and make you long for a night in a Latin Quarter fleapit’ – Times Literary Supplement

‘The Beat Hotel is as faithful to detail as it is loyal to the Beat spirit… Miles has the knack of conveying the excitement of that place and that time as though drawing upon firsthand experience.’ – Wired