You are here » Books » Pink Floyd: The Early Years. 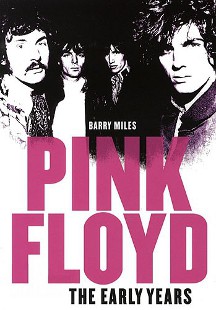 All the through the late seventies and the eighties, I produced dozens of rock ‘n’ roll books for Omnibus Press: usually books that fitted into already existing series such as Bob Dylan in His Own Words, The Beatles in Their Own Words; David Bowie in His Own Words or Pink Floyd, a Visual Documentary; The Police, a Visual Documentary; Zappa, a Visual Documentary or The Rolling Stones, a Visual Documentary. For a while these were interspersed with more series books, beginning with my Allen Ginsberg biography which I started in 1984, but I have always alternated major projects – books which might take two, three or even four years – with ‘quickies’. I had already written a Visual Documentary on the Pink Floyd, I wrote a discography of their record releases, and covered their story in both In The Sixties and Hippie, so this book seemed an obvious quick book to do as I had already assembled a considerable number of files on them. I was involved in the UFO Club and saw them play many times in the early days so it was an era I was completely familiar with. I researched and found all their childhood houses in Cambridge and photographed them, and put the book together rather quickly. I was expecting it to be released in glorious psychedelic colour, more of a coffee-table book than a regular paperback, as the Syd Barrett period Floyd lent itself very much to such a treatment; in fact it is a gift to a graphic designer. Instead, it was treated in a very conventional way and to my mind looks very dull. But Omnibus has a history of re-packaging, so who knows what the future might bring.