You are here » Books » Paul McCartney: Many Years From Now.

Paul McCartney: Many Years From Now. 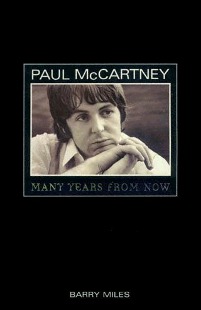 ‘I’ll give you it as I remember it… a sequence of things that did all happen within a period. So, it’s my recollection of then…’ – Paul McCartney

Andrew Wylie, my agent, suggested Paul McCartney as the subject of my next book, ‘but it has to be authorised,’ he said. I wasn’t sure I could even reach Paul. I hadn’t seen him for at least ten years; when Linda came on the scene she made sure that all his old pals that knew and liked Jane were excluded, so I didn’t know how he would react to the idea of a biography. I wrote to him, weeks went by and I almost forgot about it. Then one day I answered the phone and he simply said, ‘It’s Paul. I think it’s a good idea. You were there, you knew all the people, you’re the right person to do it.’ He also spoke the famous line, ‘Have your people get in touch with my people.’ Well his people were of course Eastman and Eastman, tough New York lawyers and Andrew was really no match for them so Paul finished up with almost all the money. The negotiations were very long and very painful, but when we did at last start work it went well. I had all of Paul’s archives delivered to my flat, six boxes at a time, and went through thousands of press clippings. It was not as rewarding as I had hoped because fans had broken into Cavendish Avenue on a number of occasions and stolen most things of worth but there were a few gems. With a biography of a literary figure like Ginsberg or Burroughs there are journals and letters to draw upon – in Ginsberg’s case many thousands of letters, all on deposit at institutions around the States. With a rock ‘n’ roll figure, there are published interviews and that’s about it.

Fortunately Paul agreed to be interviewed and over the next three or four years we recorded 40 or more tapes; some at his house in Cavendish Avenue by Regent’s Park, or at his office at 1 Soho Square, where he would loll on the sofa and reach up behind him to casually rub one of de Kooning’s Woman series with the back of his hand. But mostly we taped the interviews at his recording studio on Gun Hill in Sussex or at his Sussex home. One of his members of staff would pick me up at Hastings station and drive me to the venue. I usually got there before him if it was the studio. There were always freshly made sandwiches on plates for the staff, wrapped in cling film so they didn’t dry out. In the room above the studio Paul could this time reach out to quickly play the opening notes to ‘What’d I Say’ by Ray Charles on the actual electric organ that Charles used at the Atlantic Records studio. Or, if he felt inclined, he could grab the actual double bass used by Bill Black on Elvis Presley’s Sun recordings, or tinkle on the harpsichord, bought from the Abbey Road studio sale, that he used on Beatles recordings. (He also had Rene Magritte’s actual paint-splattered easel, as well as his palette, a selection of conté crayons, paints and even his eye-glasses). Sometimes Linda would drop by, and was, in fact, very helpful, giving me a very good account of how they met and of the time spent in New York together before they married.

In the room above the studio where we conducted the interviews there was a fax machine, which would sometimes spew out scores of pages of documents, making an irritating noise. Often Paul would unplug it, or grab the paper and throw it straight into the bin. But usually there were no interruptions and we could get on with my questions. The last eight meetings were to go over the text, literally line-by-line as Paul had the power of final edit. That way he didn’t have to self-censor himself during my questioning. Sometimes it seemed to be just a couple of old codgers sitting there, rubbing out chins, Paul asking, ‘What was the name of that chick?’ Naturally I put a few things in the manuscript that I expected him to take out, hoping that this would protect other slightly contentious parts. In the event he left in the references to experimenting with cocaine and other drugs and only asked for two changes. One was a girlfriend who he had seen on-and-off for some years right up until the day before his marriage to Linda, who we cut out completely, and the other change was one of tone. Linda had been diagnosed with cancer and throughout the taping of the questions this fact hung heavily over the proceedings. As the book concerned only the Beatles period, with a final section on the death of John Lennon, it was inevitably very much about Jane Asher as well. In some sections, though by no means all, Paul asked for the phrase ‘and Jane’ to be taken out when I was describing some event they had attended together ‘because it makes the book seem like the Paul and Jane story.’ I could understand why he didn’t want it to seem that way, particularly as Linda was ill, and so I made all the requested changes.

It was a fun book to work on because in addition to the working visits there were special surprise live gigs in places like Southend or Cornwall that I got to attend; I went to numerous rehearsals for his tours, both in his rehearsal studio in Sussex and on the sound stage at various film studios in the London suburbs; there were film screenings and his Christmas parties in the country. I went to the premiers of his classical pieces in both Liverpool Cathedral and Carnegie Hall, I got to know his staff, most of whom seemed to have been with him for about 20 years, and for a few years I generally became part of the scenery. It would have been a lot easier to do all the recordings in one concentrated group, but Paul was preparing for a world tour and I had to catch him between rehearsals, business meetings, on his return from Brazil or from visits to Liverpool. From the very beginning we had decided that the book should not paw over the tired old story of Beatlemania one more time and we made a point of trying to find new material that was not in all the scores of other books about the Beatles. I had known Paul when his interest in the avant garde was it its height, and was able to recount many incidents that were new to even the avid fans. I was very pleased with it, despite its curious structure, and still am.

‘A must-read for anyone interested in the Beatles, the ‘60s or, for that matter, modern culture itself.’ – People Magazine

‘Undoubtedly one of the great Beatle books’ – The Times

‘A fascinating account of 60s London in the throes of massive social and cultural change as it evolves from residual 50s austerity and deference through the inauguration of “swinging London” to the development of an intoxicatingly rich and dazzlingly varied counterculture ‘ – Charles Shaar Murray , The Observer

‘Miles has offered us a treasure’ – Sunday Times