Good clean fun: Sixties Soho was wild, weird and often VERY silly… but its heart was in the right place 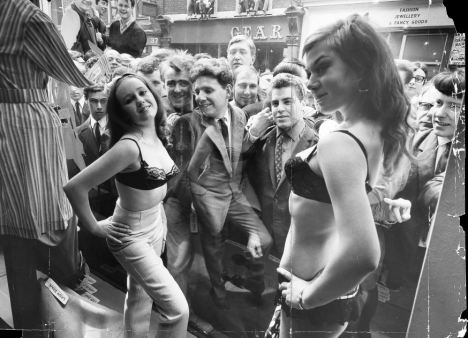 Centre of attention: Semi-clad models at a London boutique in the Sixties

The stereotype of the British character as conformist, undemonstrative and emotionally repressed is stood on its head in this volume, which calls itself a counter-cultural history of London since 1945.

Here you will find a catalogue of weirdos, eccentrics, true originals and some madmen, together with bizarre uninhibited behaviour such as I doubt any other city but London could provide.

The austerity-ridden late Forties and Fifties are usually seen as hide-bound, po-faced, dull and deferential. But there was a liberated island in London, a Bohemian enclave of nonconformity. It is called Soho.

Here you would find avant-garde artists, writers, poets, jazzmen, film-makers and intellectual layabouts who liked talking, huddled together on a circuit of watering holes which they perambulated daily.

At the pub called the York Minster, known as The French (after Gaston, its mustachioed landlord), and the Colony Room club known as Muriel’s (after its formidable hostess Muriel Belcher) and two nearby clubs – the rather grand Gargoyle (with decor by Matisse) and the Mandrake – you could contrive to drink all day with the curtains drawn or far into the night.

Characters abounded, outstanding among them Francis Bacon, still new and controversial. His genial moonlike face and air of bonhomie contrasted strangely with the dark violence of his paintings. He drank only Champagne and liked everyone about him to be doing the same, often at his expense.

Muriel, whose terms of endearment or insult cannot possibly be repeated here, originally offered him free drinking in return for bringing in the sort of customers she liked. She called every man except Bacon ‘she’. He called her Mother. Among the regulars were Lucian Freud and many other painters, Colin MacInnes, whose book Absolute Beginners set the tone for the coming era, and George Melly, then drumming up his career as a jazz singer- entertainer.

Another gathering place was David Archer’s virtually free bookshop in Greek Street. A tall, nervous, courteous man (rumoured to own lands in Wiltshire), Archer had a complete unconcern for money.

He saw his shop as a salon in which people could spend the day in literary talk. There was a lending library and coffee bar, presided over by a sumptuous beauty, Henrietta Moraes.

He hated parting with books. He would tell intending purchasers that they could get it quite easily at Foyles nearby. He gave away all his money to friends, hard-up writers and his boyfriend, John Deakin, the photographer.

Impecunious writers were invited to help in the shop, including Colin Wilson.

When the money was all gone, Archer ended up in a hostel for the homeless, where he died leaving £1 10s. In his tragic way, he personified the alternative, uncommercial culture we all hoped for.

The Sixties saw the birth of the underground culture. It was sparked off by the Albert Hall reading of 1965, entitled Poets Of Our Time. The Albert Hall was hired on an impulse and money borrowed by a poets’ co-operative, including the author of this book and his friend Allen Ginsberg. To their amazement, all 7,000 seats sold out. The poets performed from a central platform like a boxing ring. Some were inaudible, but others, like Adrian Mitchell, shouting his hate poem against the Vietnam war, went like a storm.

The realisation that there were that many young people seeking new outlets encouraged the birth of the International Times, a news sheet of the counter-culture and drug scene which Fleet Street steadfastly ignored.

It was launched with a party at the Roundhouse, in those days hardly changed from the railway turntable shed it used to be – there were no seats inside.

On a very cold night, 2,000 people paraded – the girls in miniskirts and glitter to music from the Soft Machine, one of whom rode a motorcycle round in circles to enrich the sound. Then Pink Floyd played to a psychedelic light show and blew the fuses, plunging the building into darkness. Yoko Ono took the stage and invited everyone to touch one another in the dark.

As the first underground newspaper, the IT proved popular, but regularly ran out of money and was raided by the police, who confiscated their address files, their phone books and their typewriter.

They had been set on by the oleaginous lawyer Lord Goodman, prime minister Harold Wilson’s fixer. In protest, a mock funeral marched to the cenotaph where the corpse labelled IT leaped up to harangue the police.

This persecution by the establishment, like the later trial of the magazine Oz for blasphemy against the sacred icon, Rupert Bear, shows that for all the liberalising measures the Labour government prided itself on, freedom of speech was by no means to be depended on.

The obscenity squad was particularly active against the underground press. They even confiscated a stock of Aubrey Beardsley postcards. When told that these drawings were all on show at the V&A, the Metropolitan Police Commissioner, no less, went there personally to check if it was the case.

This compendious volume is stuffed with entertaining details as it goes on to cover such events as the 14-Hour Technicolor Dream, a rave of light, sound and plastic tubing with free candyfloss at Alexandra Palace. Here, Yoko Ono invited members of the audience to cut off her clothing with scissors connected to a microphone.

There was also the Arts Laboratory and its free cinema, with rough mattresses on the floor where you could spend the night watching interminable films by Andy Warhol.

The author Barry Miles was a cofounder of Indica Gallery (where Paul McCartney gave assistance and John Lennon met Yoko Ono) and of the International Times, so knew most of the extraordinary people in his book, which continues through the summer of love (1967) to the Sex Pistols and the punk era of the Seventies.

With a humorous and ironic stance he enjoys the telling – so we enjoy the reading, however far-fetched the events he describes.

It is all over now. There is no room for an underground culture. The sex taboos have been broken. The publications have been superseded by the internet. Experimental artists now compete for the Turner Prize.

Experimental video films can be made and shown by anyone. The young who went dancing in a haze of cannabis and ecstasy nowadays go binge-drinking.

What comes back to me like a forgotten perfume from these pages is the innocent excitement and curiosity that surrounded the Happenings and attempts at outrage, the experiments at living differently from the norm. Of course, a lot of it was silly or mistaken. But nobody was doing it primarily for money. Will we ever be like that again?