You are here » Books » London Calling 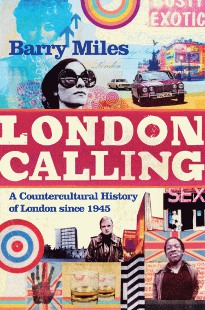 London Calling is the story of the counter-culture from the end of the Second World War until the end of the century, with the emphasis of those who were really living it. If the status quo is not challenged then societies and cities fall into stasis. It is those people who break the rules, and sometimes the law, that are at the creative heart of society. London Calling shows how people behaving badly made London into the capitol of the art world, at least for a while.  Oddly enough one of the best reviews I received was from Boris Johnson, Mayor of London, writing in the Mail on Sunday. Aside from being nice about the book: ‘I devoured this wonderful cultural history’ and ‘I wish I’d been a hippie,’ he later commented in a radio show that what London needed was more ‘counter culture.’ At first I was puzzled by this remark, then I realized that this is where many of the ideas that power the ‘creative’ industries comes from: London has been famous for its street fashions ever since the Teddy Boys: Hippies, Glam rockers, Punks, New Romantics and the present Shoreditch-Look have all been pillaged by the fashion industry and sold around the world; the advertising industry likewise has taken the cutting edge ideas and images of everything from Pop Art to the YBAs and turned them into ads. It was no surprise that the YBAs’ main patron was an advertising executive. The book generally concentrates on people who live or lived completely for their art, and if there is a funny story around, I have always tried to include it.

‘There is nothing more assuring than the author telling us ‘I was there’… Miles has a wonderful eye for the bizarre.’ – The Financial Times