You are here » Books » Jack Kerouac: King of the Beats. A Portrait.

Jack Kerouac: King of the Beats. A Portrait. 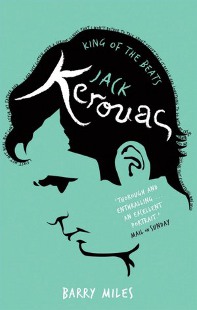 Having written books about Allen Ginsberg and William Burroughs, it seems obvious that the next Beat biography should be of Jack Kerouac to complete the trilogy. I was a little hesitant to do it because I never met him, whereas both Ginsberg and Burroughs were friends, nor did I have the same degree of respect for him as I had for the other two; I thought his work was very uneven. Visions of Cody is my favourite book; to me it is an overlooked work of genius, I also very much like Dr. Sax, On the Road, The Subterraneans, and The Dharma Bums but I find Visions of Gerard mawkish and sentimental, and Pic is downright terrible. I have also never been convinced (along with William Burroughs and Gregory Corso) by Allen Ginsberg’s assertion that he was a great poet. I was also disturbed by his racism, his anti-Semitism and by the cowardly way in which he abandoned his daughter. The consequence was that I was possibly more critical of him that I should have been, in that I usually at least attempt to be objective, and let the reader make up their own mind, based on the facts I have presented. Predictably it caused consternation among his hard-core fans. I avoided reading the on-line Beat Generation blogs for a few years after it came out, just as I avoid reading any reviews of my books except the good ones, which Rosemary shows to me. Who needs the aggravation?

‘Compelling and honest’ – The Times