You are here » Books » In the Seventies: Adventures in the Counterculture

In the Seventies: Adventures in the Counterculture 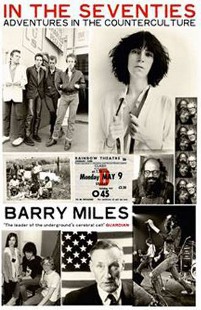 In the Seventies follows on from my In the Sixties, beginning with the Weathermen explosion in Greenwich Village, which happened just as I moved to New York, and ending with writing for New Musical Express (NME) during the punk period. It seemed to me that the Seventies was when most of the things that people attribute to the sixties really happened: this was the age of extremes, people took more drugs, had longer hair, weirder clothes, had more sex, protested more violently and encountered more opposition from the establishment. It was the era of sex and drugs and rock’n’roll as Ian Drury said. The countercultural explosion of the 1960s really only involved a few thousand people in the UK and perhaps ten times that in the USA – largely because of opposition to the Vietnam war, whereas in the Seventies the ideas had spread out scross the world. I spent about half of the Seventies in the USA and this is a personal memoir of living in hippie communes, life in the ‘legendary’ Hotel Chelsea, life as a rock ‘n’ roll critic writing for NME and experiencing the London and New York punk scenes first hand.

The seventies was the time of flight to country for huge numbers of hippies, or counter-cultural folks, who were fed up with police harassment and thought they would encounter less hassle from the authorities in the countryside. Many of them had been living in urban communes and had become vegetarians so a move to the country was the obvious next step. It was also a place where many of their ideas of communal living could be tested, and where they could grow organic food. In Britain it happened mostly in Wales, the West Country and Cornwall.

I encountered it mostly in the USA, first by living on Allen Ginsberg’s hippies commune in upstate New York, then – with my girlfriend Ann Buchanan and Allen Ginsberg – by taking a floor in a hippie commune in Berkeley, California.  During the winters and spring in New York I lived at the Hotel Chelsea, so In the Seventies has a lot of stories about fun and games on Ginzy’s farm and also descriptions of  – hopefully amusing – incidents at the Hotel Chelsea, particularly concerning Harry Smith who became a great friend when I was living there. Back in Blightly, I worked closely with William Burroughs, describing his archives, so the book contains a lengthy description of Burroughs and his life in London. In the mid-seventies I began writing for New Musical Express, and there are descriptions of encounters with the The Clash – whom Elly Smith and I almost finished up managing – the CBGBs scene, The Ramones, Patti Smith, The New York Dolls, The Damned, Keith Moon, and so on, as well as general purpose tales of rock ‘n’ roll madness. I finished the decade by editing Time Out, the London listings magazine, so much of the book involves some sort of editing work. It is a personal memoir, but it mirrors the general youth movement in society as experienced in the UK and the US – and it is supposed to be amusing!