You are here » Books » Frank Zappa: The Biography » ‘Zappa’: Freak Out! 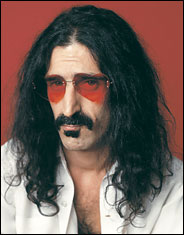 Frank Zappa is one of the most unclassifiable figures in American popular music. A passionate devotee of rhythm and blues, he fused rock with jazz and atonal music. His persona was half angry Beat hipster and half loopy Mad magazine satirist. Barry Miles’s new biography, ”Zappa,” argues that he was a major artist in the line of Courbet and Duchamp. Despite sometimes tendentious overstatements, the book does indeed establish that Zappa, through his genre-shattering experiments, technical virtuosity and staggering productivity, deserves to be considered a central figure of late-20th-century American culture.

Zappa was born in 1940 in Baltimore to a struggling Italian immigrant family. His strict father, who had been born in Sicily, got a job with the Defense Department and moved his wife and four children around the country until they ended up in California. By 15, Zappa had attended six different high schools and, according to Miles, had trouble forming close friendships for the rest of his life.

Young Frank was a bored, mediocre student who made his mark as a class clown. He enjoyed mixing explosive chemicals, and one dangerous prank at a parents’ open house got him suspended from school. He was attracted early on to doo-wop, particularly as performed by Mexican-American bands, whose flashy ”pachuco” (juvenile delinquent) style he adopted. He played in amateur bands as a drummer and then a guitarist.

Zappa was interested in sound for its own sake — as in the cowbells and car horns of Spike Jones’s recordings. A magazine article condemning a dissonant drum piece led him to Edgard Varese’s ”Ionisation,” which changed his life. He was riveted by Varese’s mix of traditional and electronic instruments as well as recorded street sounds. After moving on to Stravinsky, Zappa dreamed of becoming a serious composer.

He dropped out of community college after one semester and tried making low-budget films. There was an early marriage and divorce. As Miles chronicles Zappa’s serendipitous progress toward his first recordings, we get a fascinating panorama of the 1960’s counterculture in Southern California, where folk music was cross-fertilizing with hard rock. The cast of characters includes the Byrds and the Doors as well as Grace Slick, Eric Clapton, Eric Burdon and Mick Jagger, who drop by or hang out to jam in the cabins and cottages in the overgrown canyons outside Los Angeles. Miles’s description of the bizarre scene, with its squatters, transients and hordes of eager groupies, vividly captures that magic creative moment.

”Freak Out!” (1966) was Zappa’s first album with the Mothers of Invention. It was a landmark in rock history — one of the first integrated concept albums. With its kaleidoscopic moods and vaudevillian jokiness, ”Freak Out!” sketched an epic picture of a frivolous, media-addled America under authoritarian surveillance. ”Who are the brain police?” one song asked. Another, ”Trouble Every Day,” was about the Watts riots. Running through it all was a naughty bawdiness, as in Zappa’s classic double entendre, ”Suzy Creamcheese . . . what’s got into you?”

The Mothers of Invention went through many staff changes over the years. Miles unsparingly presents the dismal record of Zappa’s grudging, sometimes brutal treatment of his musicians. He denied their contributions to his success and later withheld royalties.

Zappa was a brilliant guitarist — he called his solos ”air sculptures” — but he aspired to be taken seriously as a composer. His avant-garde work was characterized by complex time changes that were difficult to play. Many classical musicians attested to Zappa’s ability to find their strengths and stretch them to the limit. The London Symphony Orchestra performed his music; in 1992, a comprehensive performance of his work by Ensemble Modern at a Frankfurt opera house received a 20-minute ovation.

Miles traces Zappa’s credibility problem to his ”self-destructive” habit of giving sexual or scatological titles to his serious pieces. Zappa was an incorrigible ”namer,” he says, who called his daughter Moon Unit and named his son Dweezil, after one of his wife’s toes. But Miles is too scolding about Zappa’s absurdist sensibility. His titles were hilarious, from the album ”Burnt Weeny Sandwich” to such songs as ”Help, I’m a Rock,” ”Prelude to the Afternoon of a Sexually Aroused Gas Mask,” ”Don’t Eat the Yellow Snow,” ”Don’t You Ever Wash That Thing?” and ”The Meek Shall Inherit Nothing.”

Miles, who knew Zappa, often seems ambivalent about him. There is a gap between the ”juvenile and prurient” Zappa he describes and the one we see in the book’s sensational photographs, which show a man of burning magnetism and piercing intellect. Miles calls Zappa a ”cold nihilist” who felt no real emotions for anyone. Along with ”cynicism and misanthropy,” he detects Catholic guilt and ”deep-seated problems with women.” Zappa was ”stuck in a 50’s time warp” — yet the bold feminist Germaine Greer was a Zappa fan.

Whatever the meaning of the S-and-M and fetish imagery in his songs (a theme that makes Miles squirm), the picture painted here of Zappa’s family life is troubling. When not touring (which he loved to do — Miles calls him a ”road rat”), Zappa spent 10 to 18 hours a day holed up in his cavernous basement studio in his Tudor mansion in the Hollywood Hills. He was a born tinkerer and a groundbreaker in early digital production.

Addicted to black coffee and cigarettes (he was fiercely antidrugs), he slept during the day and saw little of his family. His second wife, Gail, said, ”Frank did not do love.” When she was 13, Moon Unit slipped a note under the studio door to ”introduce” herself and her ideas. The result was the hit song ”Valley Girl,” a phenomenon when it was released in 1982. Because he thought formal education a waste of time, Zappa took his children out of school at 15 and refused to pay for college.

Interviews were a testy art form for Zappa. He said, ”Rock journalism is people who can’t write, interviewing people who can’t talk, for people who can’t read.” As the record industry became corporatized, he aggressively maintained his artistic independence and released sometimes foolishly anticommercial work (such as a double album starring a psychotic street person).

An ally of Larry Flynt, Zappa was a militant advocate of free speech who, in 1985, waged war against the Parents’ Music Resource Center, formed by Washington wives, including Tipper Gore. In forceful testimony before a Senate committee, Zappa deplored the group’s call for a ratings system for albums. Having raised his own children without rules, he never acknowledged that parents might have legitimate concerns about hypersexualized mass media.

So high was Zappa’s European reputation that Vaclav Havel invited him to be a trade and culture representative for Czechoslovakia in 1990 — an arrangement quickly terminated by the first Bush administration. A few months later, Zappa learned he had inoperable prostate cancer. He died in 1993 at 52. His children put his espresso machine and cayenne pepper into the coffin.

Zappa still has a tremendously loyal international fan base. His legacy is his pioneering marriage of art and technology. When he found the Synclavier, a computerized synthesizer, he finally attained what Miles says he always wanted — the ability to make music without fallible human musicians. But the Synclavier is now outmoded. Thus, Zappa’s machine music, the acme of his composing career, will rarely ever again be played as he wrote it.

Camille Paglia is university professor of humanities and media studies at the University of the Arts in Philadelphia. Her new book, ”Break, Blow, Burn: Camille Paglia Reads Forty-Three of the World’s Best Poems,” will be published in March.