You are here » Books » Frank Zappa: The Biography 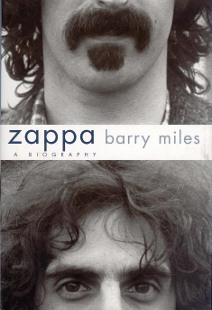 My publisher suggested this, knowing that I used to know Zappa. I first met him in New York in 1967 when Ken Weaver of the Fugs, who I was staying with in the Lower East Side, took me to see the Mothers of Invention who had taken a downtown theatre for the summer season. Frank was touting the show on the sidewalk and wanted to know everything about the English scene. When Zappa came to London later in the year, he used the Indica bookshop as his HQ, doing interviews there and receiving phone-calls. International Times was published from Indica’s basement, and when his British record company refused to print the lyrics to Absolutely Free on the British edition of the album on the grounds that they might be arrested for obscenity, he ran them in IT instead. It was for this article that the notorious photograph of Zappa sitting on the toilet was taken which was turned into a poster and sold all around the world. In 1969 I was working in San Francisco and Los Angeles, and on several occasions stayed at his house in the hills off Laurel Canyon. It was during one of these trips that I attended the recording sessions for Hot Rats, one of my favourite albums; popular only in Britain, apparently. Over the years I attended recording sessions with Frank in LA, New York and London, and I also did a number of interviews with him, first for IT, and later for NME. It may have been a long piece published in Mojo that suggested the idea of a book to my publisher. I always liked Frank but we also disagreed on a number of subjects; the great thing about him was that he enjoyed a good argument. I last saw him in London when he visited my flat and we spent a long evening, late into the night, listening to records, trying to find the World’s Worst Psychedelic Guitar Solo. I think it was on a Jefferson Airplane album, but I can no longer be sure. Writing the book necessitated a trip to Los Angeles to see his house and high school in Lancaster, California, and visit other Zappa sites on the Strip. I think he was a musical genius who probably released too many albums, some of them very uneven, but who is up there with the Beatles, Stones, Hendrix and Dylan as one of the great sixties musical innovators. He was one of the pioneers who alchemically transformed pop music into an art form.

‘This is rock biography at its best’ – Mojo

‘Miles’ book does indeed establish that Zappa, through his genre-shattering experiments, technical virtuosity, and staggering productivity deserves to be considered a central figure of late-twentieth-century American culture.’ – The New York Times Book Review

‘Miles has listened hard and researched well to craft a critical yet respectful biography of a man many consider a key musical genius of the past forty years… Read Miles’ biography to affirm Zappa’s creativity, hostility, and wild exploitative lifestyle. Read it, too, for the story of a ruthless autodidact of strange, warped humanity.’ – San Francisco Chronicle