You are here » Books » Charles Bukowski 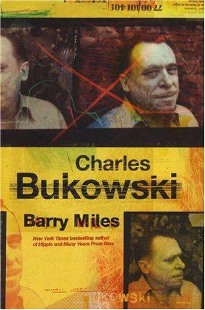 All through the sixties one of the strongest voices in the little literary magazines that I sold at Better Books, then later at Indica Books, was Charles Bukowski, so when, in 1968, John Lennon and Paul McCartney set up Zapple Records and asked me to be the label manager, I put Bukowski near the top of the list of people I would like to record. I did in fact record him, early the next year, at his home in a seedy part of Hollywood. He was still working for the Post Office on the night shift, and refused to enter a recording studio for fear that he would mess things up and embarrass himself. Consequently I wired his living room up and left him with a tape recorder and 12 reels of tape. He filled them all but sadly, Allen Klein closed down the Zapple label before I had a chance to even edit Buk’s tapes. He was always known as Buk, pronounced, as he put it, ‘not Buk as in Fuck, but Buke as in Puke.’ I always enjoyed his books, though I felt that Black Sparrow milked the poetry a bit too much: a tighter editorial selection would have been better for his reputation and career. Having written biographies of Ginsberg, Burroughs, and the like, Bukowski seemed another obvious choice of subject. He was not a member of the Beat Generation: he was straight, poorly educated and living in the wrong city, but in many ways his career paralleled theirs. I really like this book and think it stands up rather better than some of my others. The photographs on the sleeve were originally taken for the Zapple spoken word album that never happened (Blast First released the tapes many years later as a double-CD, long out of print.)