I had a few hours between events and as we were already in Berkeley, we set off to find the house where I had lived with Ann Buchanan and Allen Ginsberg back in 1971. It was a hippie commune, about a dozen people, owned and run by a doctor and his wife. There was a palm tree in the back yard and geese or ducks wandered into the kitchen. It was very strictly vegetarian and other things beside meat were banned as well, like sugar, coffee, and cigarettes though marijuana was acceptable. In fact, because there was no lock on the door, you might find that several people would gather in the bathroom when you were in the tub, in order to discuss a pot deal. The only advantage accrued being that they sometimes offered to rinse your hair for you. One of the residents – a master printer – lived in a room only accessible through the bathroom – a somewhat inconvenient arrangement – but he didn’t seem to mind. Ann and I had a large room with a bay window overlooking the street. I couldn’t remember the street number precisely but remembered that it was in the 1800 block on Woolsey, near the Oakland city limits. It was 1801 Woolsey and hadn’t changed at all. 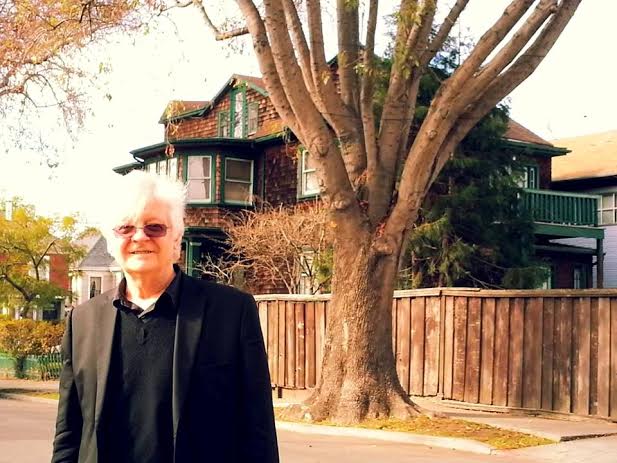 I remembered one afternoon, sitting on the bench seat that ran across the bay window, when there was a knock on the door and a stranger came in dressed in glasses, a suit and tie, with a big grin on his face. I looked at him blankly. ‘Haven’t you got it yet?’ asked Ann. It was Allen, who, on the advice of his new guru Chogyam Trungpa, had shaved off his beard. ‘You are scaring people,’ Trungpa told him. Allen looked so utterly different without his characteristic beard that he was literally unrecognizable. It took a while to get used to this new look. Allen himself didn’t like it, ‘Old liver-lips’ he called himself, but it was some time before he grew his beard again. This time trimmed neatly more in the V.I Lenin mode than the previous Karl Marx extravagance. He was intrigued by the novelty of not being recognized. Normally in San Francisco or Berkeley, half the young people on the street seemed to know who he was, shaking his hand, waving, saying hello, sometimes asking for an autograph. Now he was anonymous again. He went to a gay bar and whereas he would normally be fêted and surrounded by young men, now he was ignored. Worse, when he asked if he could sit at a table with a group of young men they shunned him and said ‘No, no, we have other people coming.’ And now here was the house again. We were all living there because we were mastering a ten-hour programme of the best recordings of each of his published poems at Fantasy Records studios down by the bay. A project that took about six months and so required an actual move to Berkeley to do it. It was on this visit that Allen memorably got up in drag – when he still had his beard – and sang with the Cockettes. I wrote about the whole period in my In The Seventies.  It was weird to see the place again after 43 years.

I enjoyed walking around San Francisco, which retains much of the atmosphere that I remember from the late sixties and early seventies. The City Lights Bookstore  is now a listed monument and Lawrence Ferlinghgetti’s epigrams on the walls have faded. His exhortation, ‘The Is The Door’ written on a door, is now half-covered by a bookcase whereas in the sixties, at Indica Bookshop, we used to sell a poster of him standing in front of it. I remembered staying in their guest room in back leading off the alley, now named Jack Kerouac Alley. Ann and I were there for a few days before Allen Ginsberg arrived in town and we found the place in Berkeley.

I have never seen so many beggars on the streets as in downtown SF, and not just in the Tenderloin. Some just lie on the sidewalk, next to the street, without even attempting to shelter against a wall. Some are drunk beyond belief, incapable of standing. Some have good acts: one guy approached me and insisted, ‘I know where you got your shoes!’ This he repeated several times before delivering his punch-line, ‘You got your shoes on your feet!’ ‘That’s good for a dollar for an old bum,’ he suggested.

I was interviewed onstage at the San Francisco Art Institute by V. Vale, editor and publisher of the RE-Search series of books including volumes of J. G. Ballard, Pranks! Angry Women, and a great volume devoted to Burroughs, Brion Gysin and Genesis P-Orridge’s Throbbing Gristle.  He was the original publisher of Search & Destroy back in the punk era. We had many friends in common and it was great meeting him. It turns out we had met before, in 1969, when I arrived at his apartment in San Francisco with Valerie Estes, looking for a record player to play an acetate of some tracks from the spoken word album I was making with Richard Brautigan. We had dinner afterwards with his wife and Vale gave me many useful sartorial tips, one of his many areas of expertise. 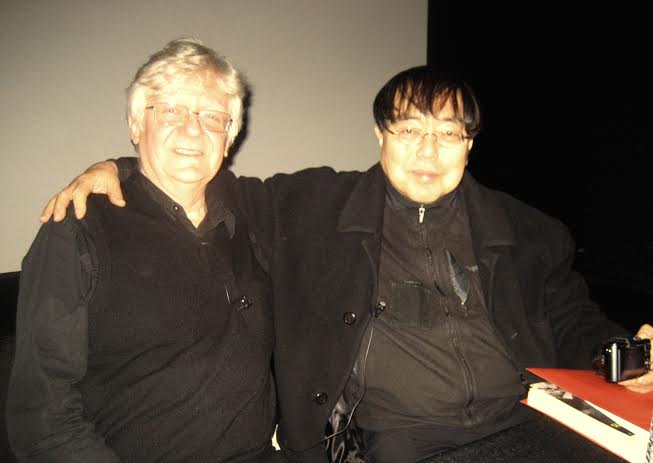 I missed Bill’s actually birthday because I spent 5 February flying to St. Louis from San Francisco, which involved a stop-over in Denver. There was a celebration at Burroughs’ grave in Bellefontaine Cemetery that night but I got in late and missed it. Snow had been dug away from the tomb and a dozen or so people braved the bitter cold to read a few pages aloud and drink whiskey and beer. My publishers had booked me into the Chase Park Plaza Hotel on Kingshighway at the corner of Forest Park where Burroughs used to play as a child and where he had his vision of a small green reindeer at the age of four. Bill had stayed in the same hotel in 1965 when he came to St. Louis after an absence of 20 years to write his piece ‘St Louis Return’ for Playboy (rejected by them but published by Paris Review).  The hotel was two blocks from Bill’s birthplace at 4664 Pershing Place (then called Berlin Avenue – changed because of the Great War), and I went to look at it several times. 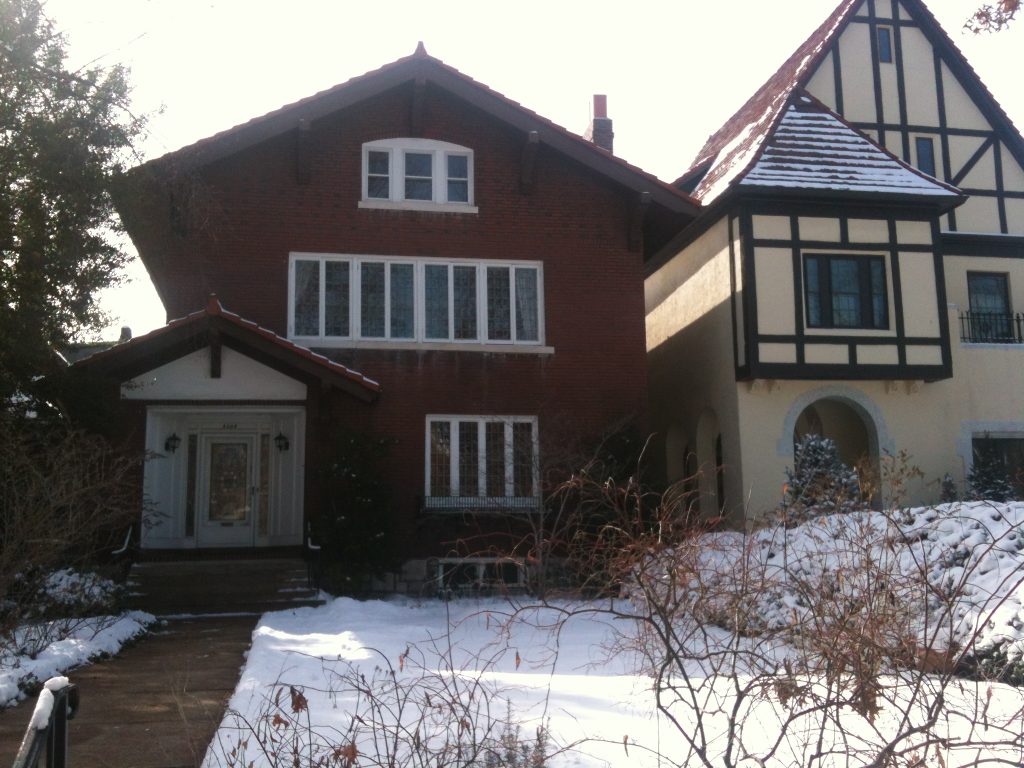 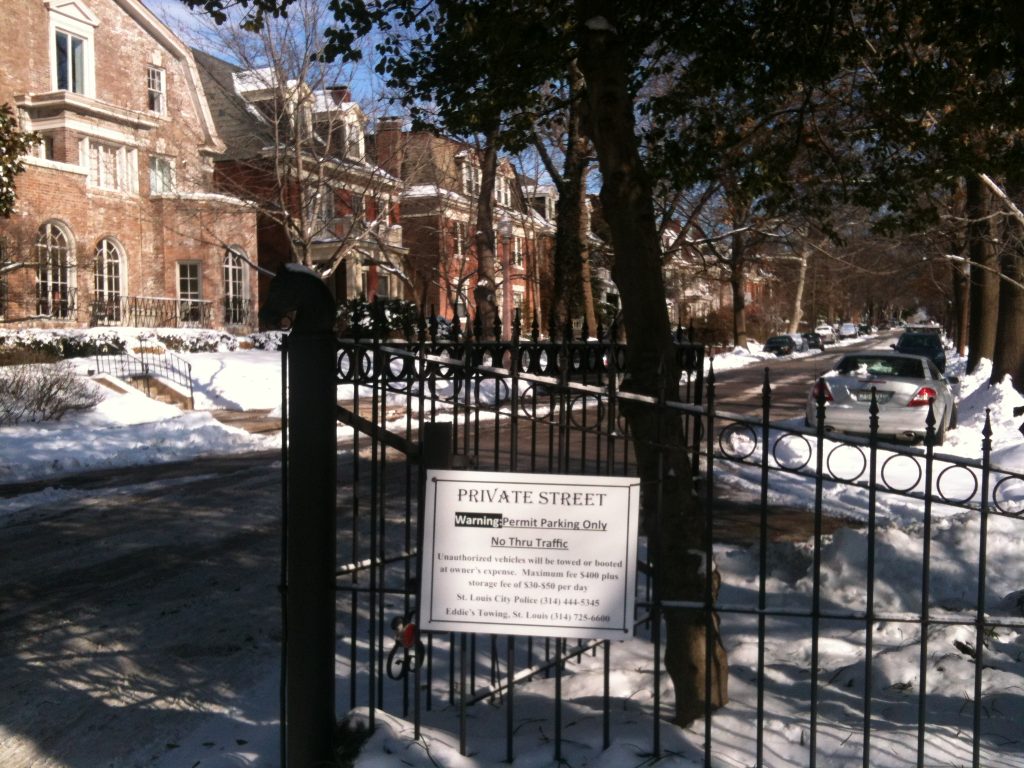 The neighbourhood has changed hardly at all. All the houses appear to be original, built around the turn of the century. The houses on Bill’s block are solid family homes with servants’ quarters but on the next block west the houses are considerably bigger and the block after that, Portland Place, they are mansions. Portland Place, which appears in many of Bill’s books, has an imposing guardhouse at the gate whereas Bill’s street just has a solid iron gate: these are all private roads, and had gatemen when Bill was a child. The bookshop, Left Bank Books, was only one more block north but when I attempted to walk there from my hotel I had to turn back because of the biting cold. The ‘polar vortex’ had descended upon St. Louis and few people ventured out. The bookshop event was a lively, friendly affair, with wine and whiskey served – left over from the previous night’s vigil at Bill’s tomb – and I think everyone had a good time; I certainly did. 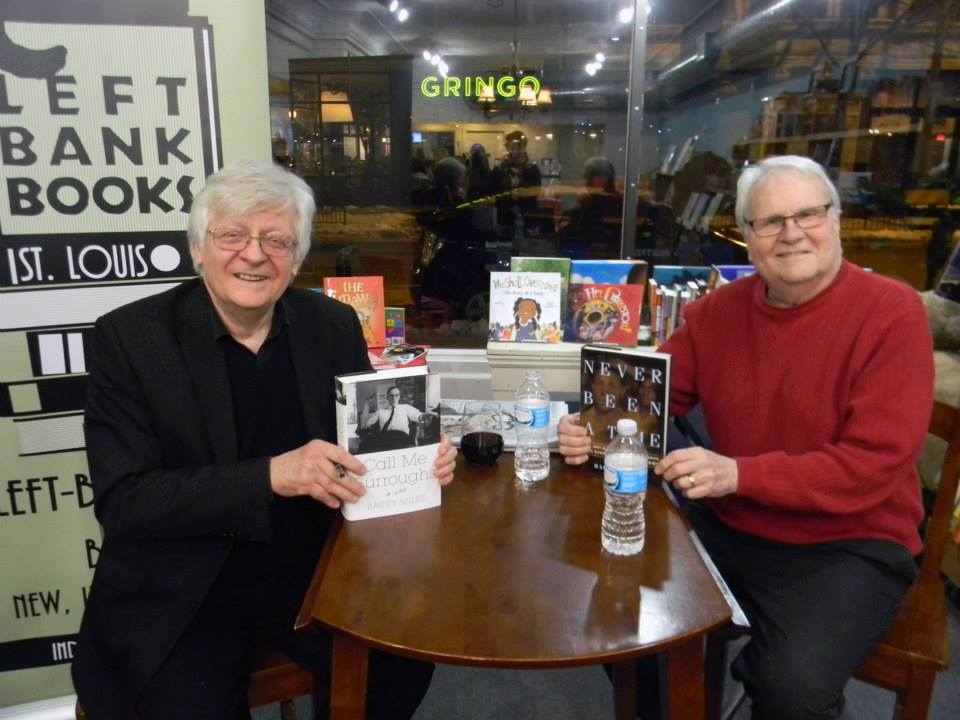 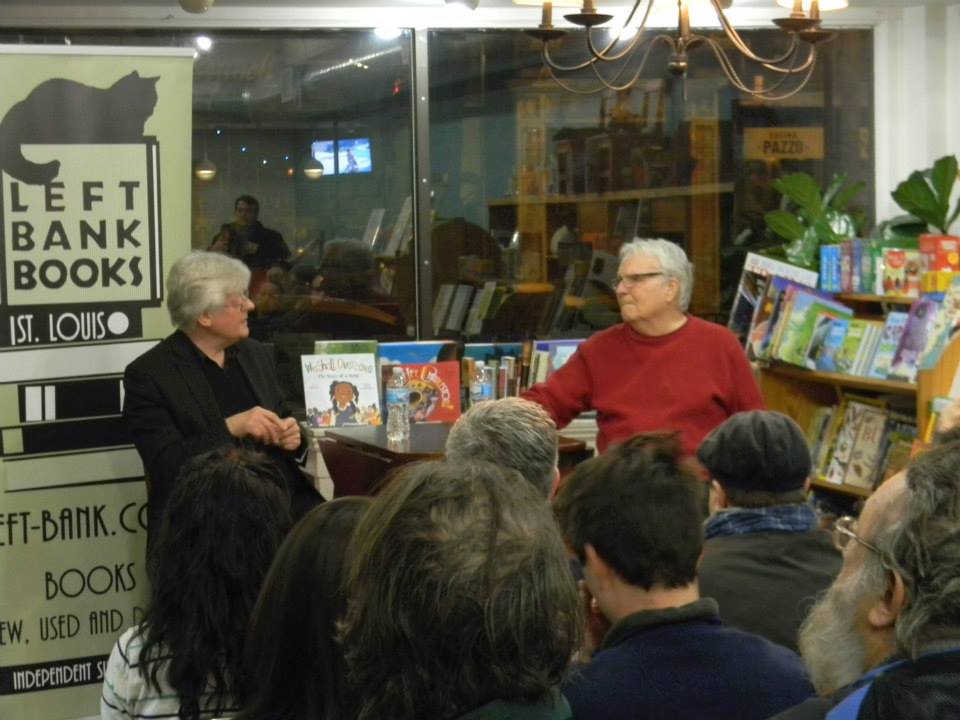 At Left Bank Books, one block from Burroughs’ birthplace

We drove to Price Road to see the suburban home where Bill lived during the later years of his childhood, and the John Burroughs School (no relation), which is virtually across the street. Bill and his older brother Mort could walk there in five minutes.  We drove out to the Bellefontaine Cemetery where, to my surprise, Bill’s grave is number one on the cemetery tour map of ‘famous and fascinating people who rest in peace within our grounds.’ The Burroughs mausoleum, built by his grandfather, inventor of the adding machine, is on a slight rise, next to a small lake and surrounded by trees. It looked particularly beautiful in the snow, with pale winter light and bare trees.  My i-phone snaps don’t do it justice. St. Louis was built on a much bigger scale than I was expecting, with enormously wide streets like Berlin and a downtown of solid stone buildings. Unfortunately all the original downtown was foolishly leveled back in the thirties so nothing old remains. 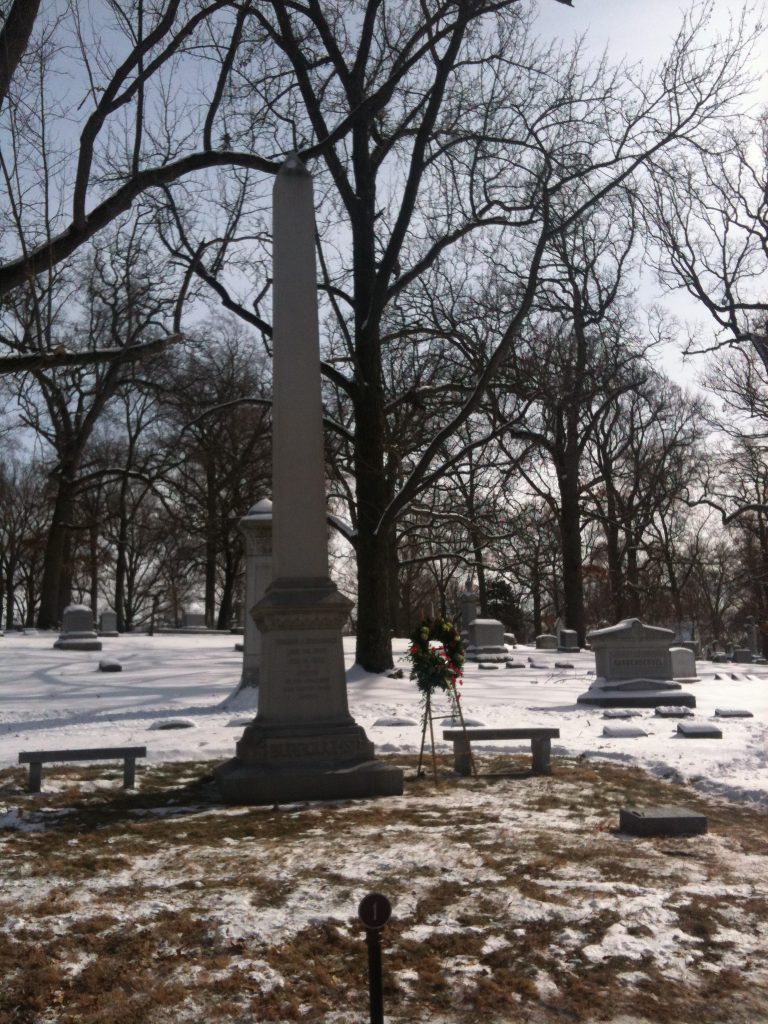 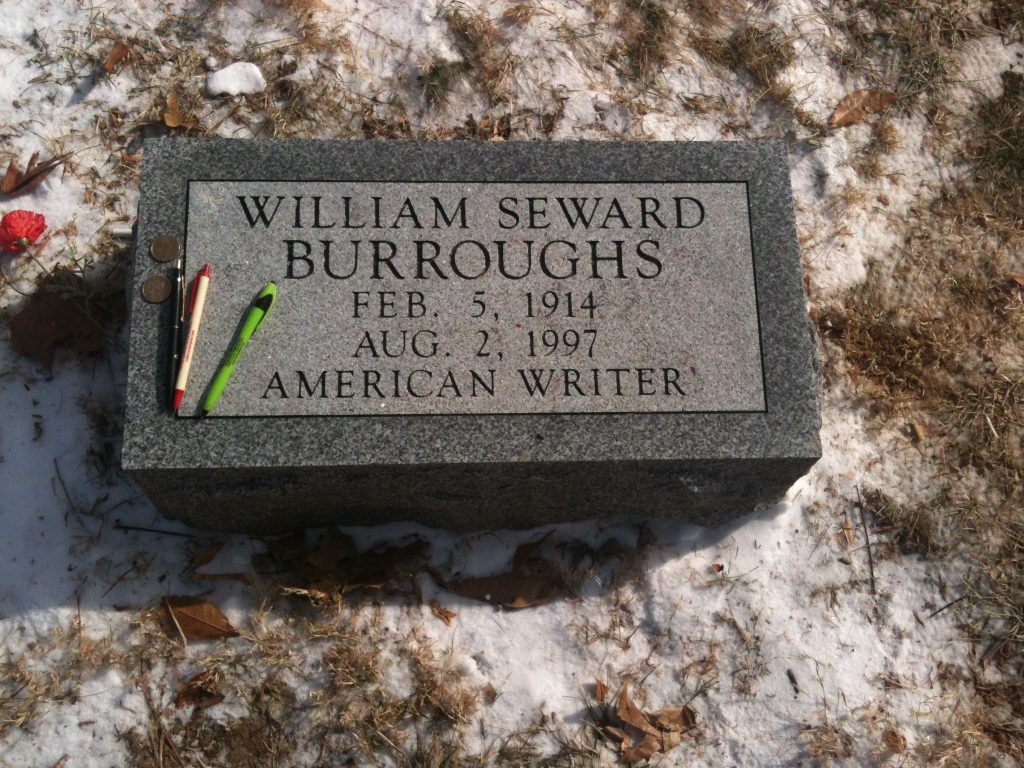 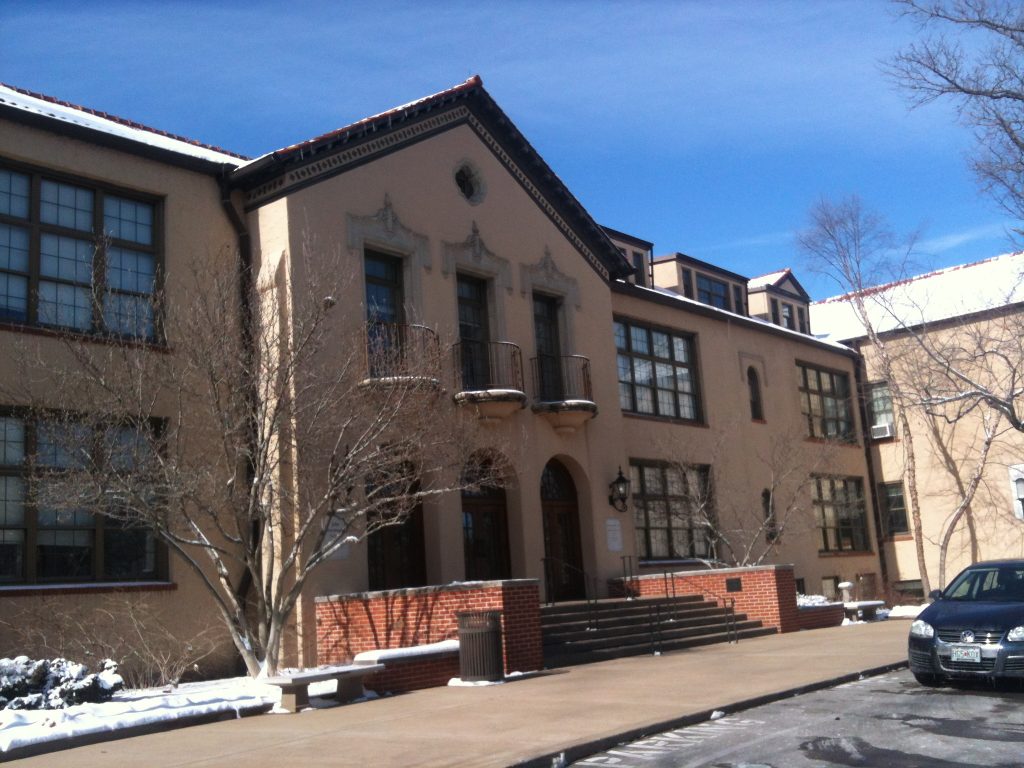