At the Intercontinental at The Plaza in Kansas City I finally realized what this strange name for a hotel meant: the Plaza is an area of KC, in fact it is the world’s first drive in shopping mall! It was designed in the twenties, when mass automobile use was coming in and had street shopping but with parking lots in the centre of each block, which is how it still is. The founder of the Plaza had spent some quality time in Saville, it seems, and many of the buildings have beautiful tile work on them. It’s well worth seeing. My hotel room looked out over a frozen river to the Plaza and downtown KC which is much more hilly that I was expecting. I had been to KC several times before and had a very different memory of it. James Grauerholz and I sought out Charlie Parker’s childhood home but inevitably it was destroyed, an unmarked site somewhere on a stretch of greensward bordering a freeway. His high school and his secondary school were both still there though, and the Jazz Museum which was very run down when we visited. We were the only visitors. Among the exhibits were pages of sheet music written by Parker, and several of his saxophones. The most evocative item, perhaps, was in the vitrine devoted to Ella Fitzgerald. Prominently placed in the front of the display was her American Express card; she was apparently the first Black woman to get one.

My media host, as they call them, was Barry Richardson who turned out to be a fervent monarchist; he told me very many things about her majesty that I did not know; nor particularly wanted to know. He had even met her when she visited the US. I’m glad he was with me because he knew who to call at one of the TV stations that was not yet open. Reception didn’t open until 8:30. I was on KCTV5, KSHB and the following morning on WDAF-TV, the local Fox station. 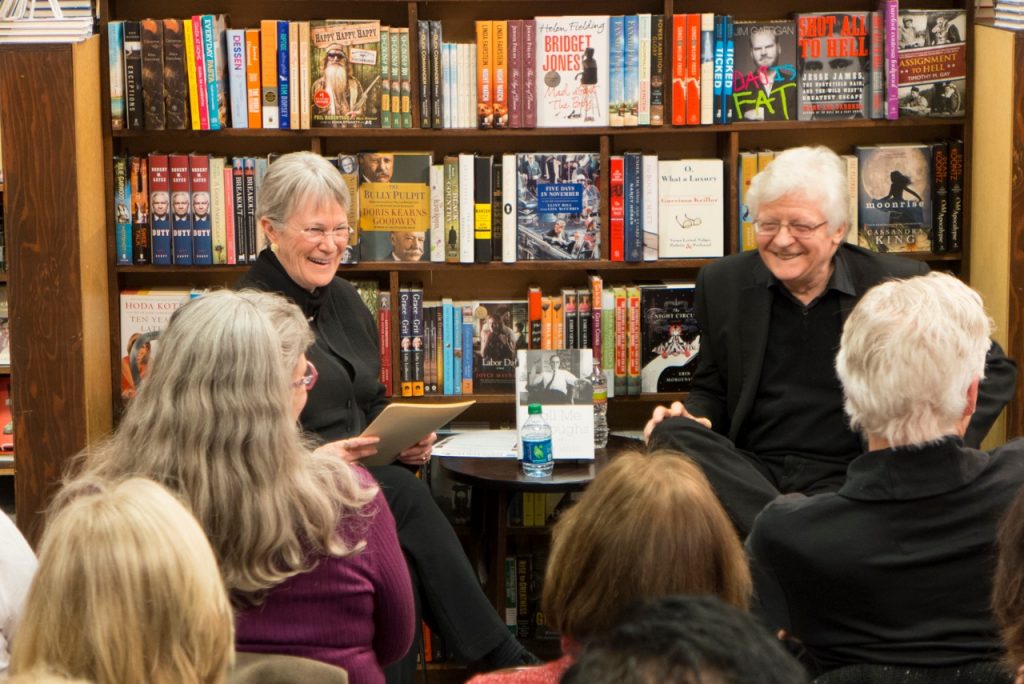 On the Thursday I did an in-store interview with Vivien Jennings, the proprietor of Rainy Day Books. She ran through the questions with me beforehand, working from extensive notes and was really well prepared. The event was pre-ticketed, a common occurrence in the States (and a growing phenomena in the UK. The event I did with Genesis P-Orridge at Rough Trade was done the same way). It means that the only was people can attend the event is to pre-buy a copy of the book. They can bring one guest. In my view, it is better to have a free event because you get a much larger attendance and those who would have paid the $32 plus sales tax would almost certainly have bought it anyway because they could get it signed, and some of the people who would not have pre-bought one, might have been intrigued by the talk and been interested enough to buy one, giving an over bigger sale.  But it’s a long time since I was a bookseller and I don’t know much about American business models.

The next day Barry drove me to Lawrence, about an hour away through a snowy landscape, for lunch at Pachamama’s where I met up with Susan Tate, director of the Lawrence Arts Center and Ben Ahivers, the exhibitions director who put on the exhibition of Burroughs’s paintings and sculptures The Creative Observer. (A very good catalogue exists, with the same title). Also there were my co-panelists James Grauerholz and Ira Silverberg and Bill, who interviewed us and kept control of the event. Early that evening there was a drinks and snacks party for local artists given by Tom King at the Burroughs House. It has all been painted and there is a new fence in front to keep off sight-seers who come wandering into the grounds. Tom has found them in the garden, looking around the back porch as if it was a museum.  After the drinks, and Tom’s excellent food (as usual), we all went to a private view of a group show of local artists at a new gallery. James, Ira and I ate dinner at the Eldridge and caught up on the local gossip. 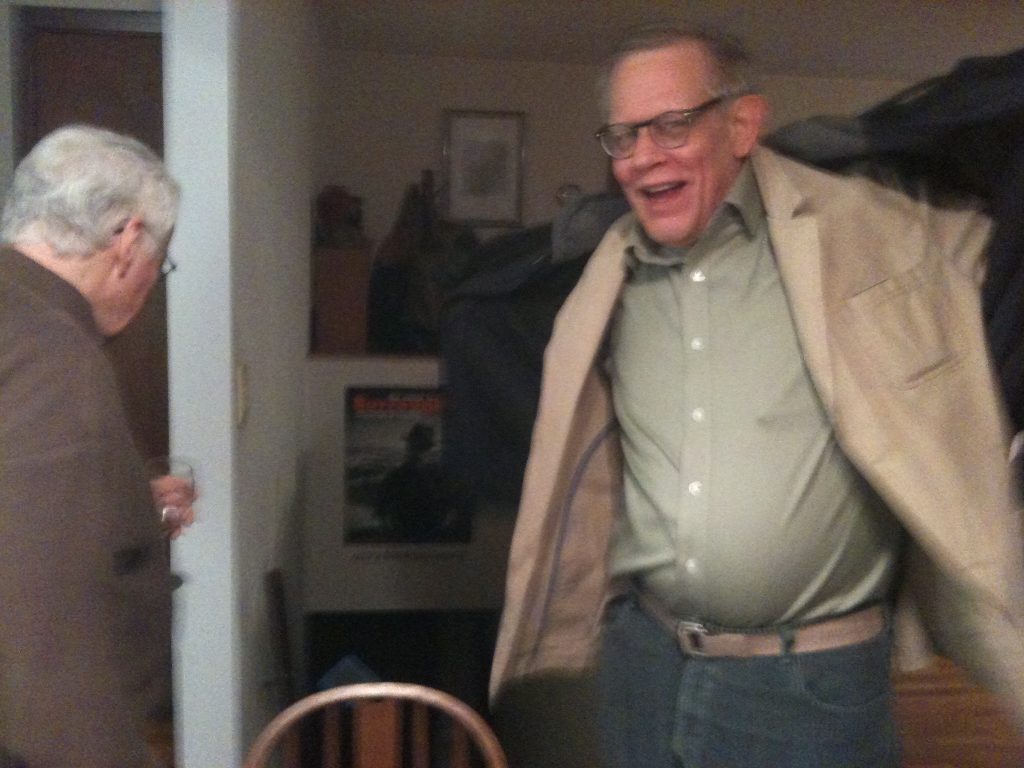 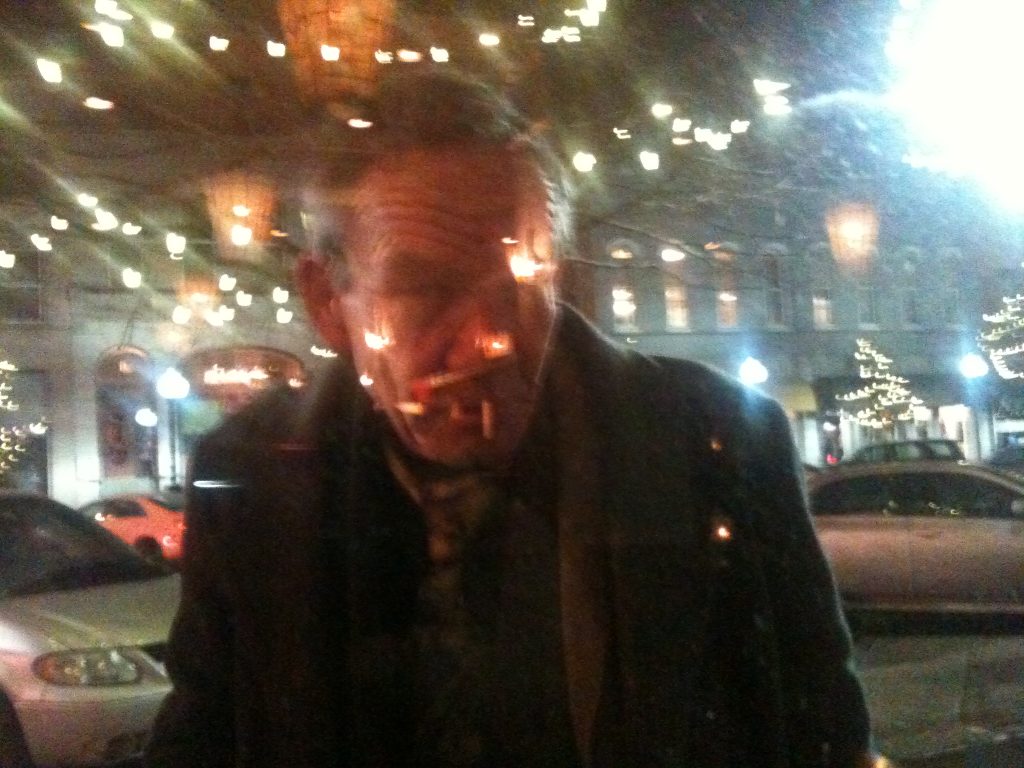 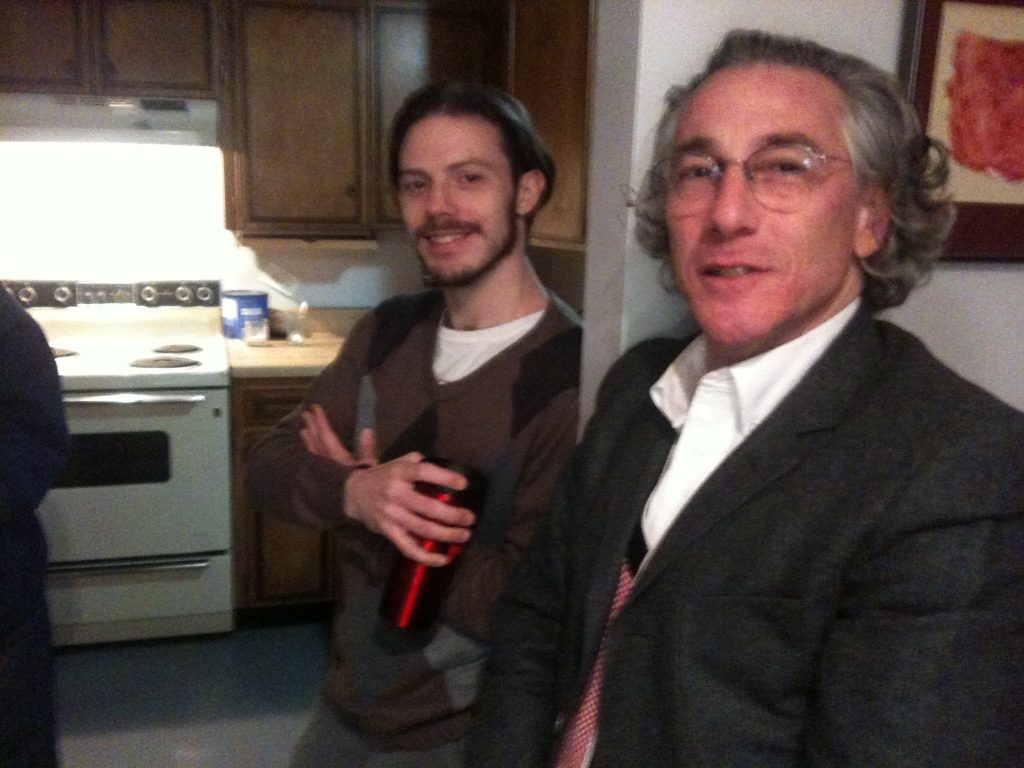 The Eldridge is a curious hotel: no mini-bar but I think that must be standard in Kansas in deference to the Bible Belt people who are offended at the very presence of alcohol. Most peculiar was the black shower curtain which if you drew it completely across to stop the shower splashing on the floor, made it so dark in the bath that you could hardly see. Maybe these religious folks don’t like to see their ‘private parts’. No coffee machine in the room either though there is free coffee in the lobby. It was great to drop into a ready made social scene in Lawrence; I knew about ten of the people at the p.v. including Wayne Propst who had on display one of Burroughs’s art boxes: Wayne had arranged cans of spray paint inside a wooden box with a red Perspex front. Bill fired at it and the third shot hit a canister on the seam, causing it to explode, ripping open the seams of the box and blowing out the front. He has mounted it on a wooden stand. Next day Ira and I were given a tour of the Spencer Art Museum by Saralyn Reece Hardy, the director. There was a James Turrell show on and they had constructed a special room in which to project an intense blue triangle. It is a very powerful piece. Much of the museum was being re-organised but Saralyn showed us behind the scenes. The conversation was so interesting that we almost forgot to see the small Burroughs show that they mounted in honour of his centenary. Yuri Zupancic kindly drove me to Kansas City airport, a chance for a long conversation. 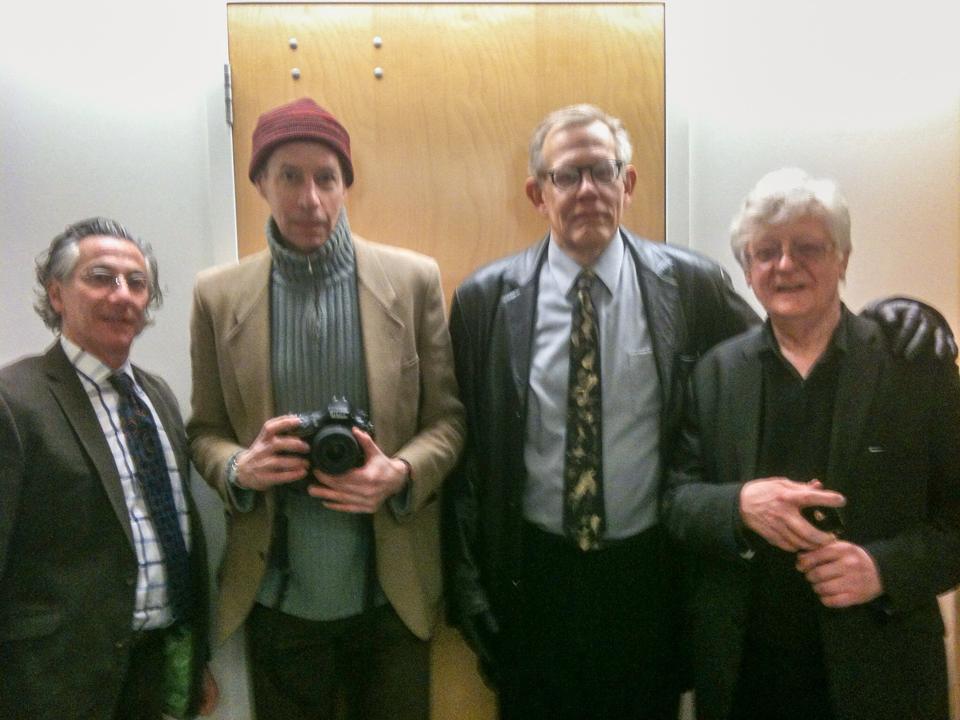 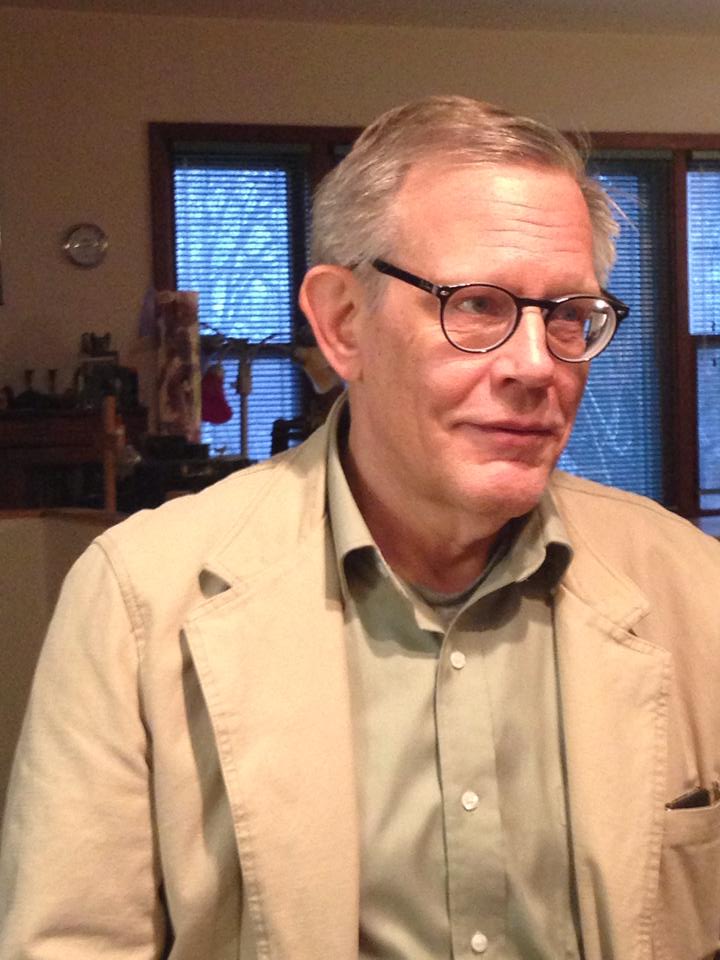 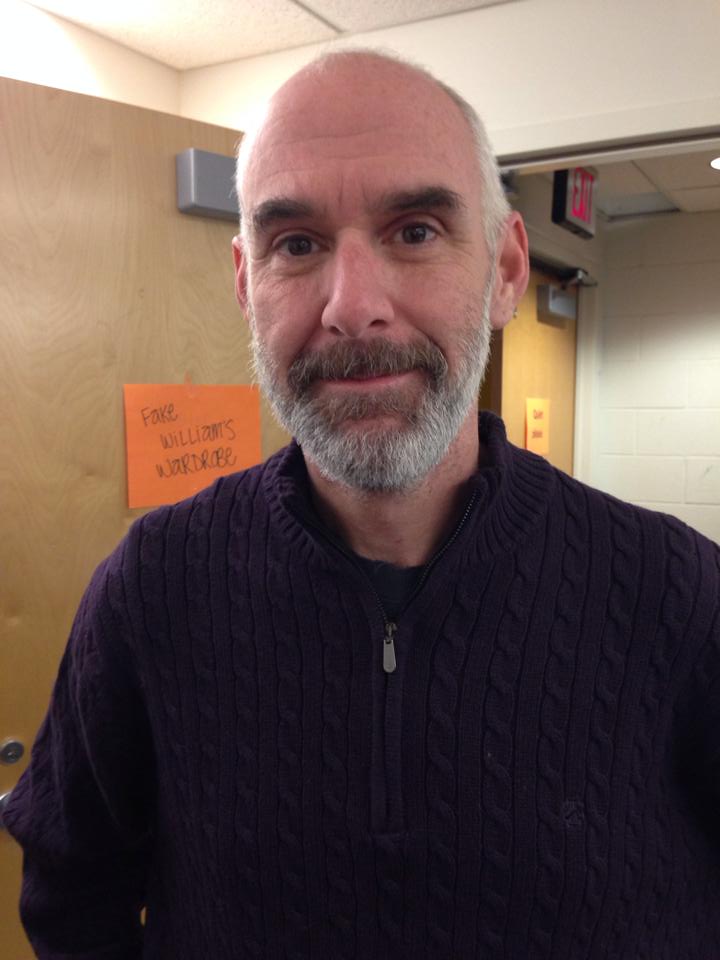 Self Portrait by TP 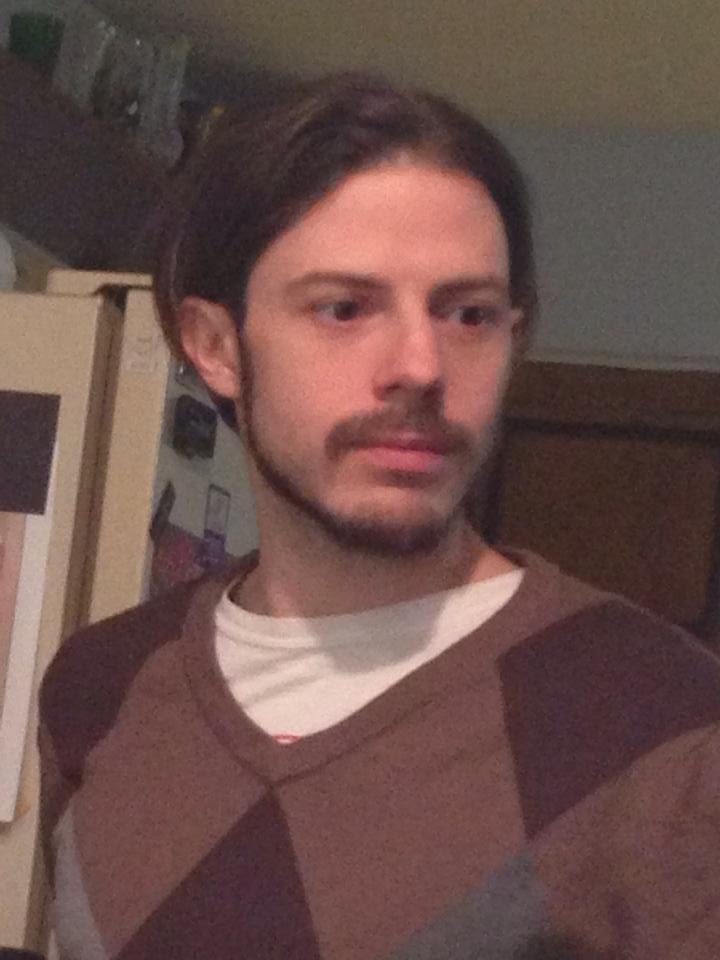