I finally managed to see the Goya Portraits at the National Gallery, and what a show! He shows how a person’s features mirror their personality and mental state; even in official and royal portraits you get a real sense of what that person was like. Everyone looks so familiar, so human. It must be something to do with the obvious speed with which he painted: buttons and brocade are rendered with blobs and dabs, drapery, clothes and furniture are sloshed on with a thick brush, a highlight is sometimes just a squiggle of paint. These details look completely abstract close up, which is the great value of seeing them in actuality: the paint quality just doesn’t show in reproductions. Some of his portraits were done in only three hours, and even the large ones must have been executed in a matter of a few days. The famous Black pictures in the Prado probably took him an hour or two at most. Of course, it helps that he was a consummate master painter, able to render the sitter’s expression in a few twists of his brush. His hand was capable of doing exactly what his eye commanded – something that few artists are trained to do these days. The later pictures are so clearly forerunners for the Impressionists I wonder I hadn’t noticed it before. The pictures are as fresh today as they were in the late eighteenth and early nineteenth century. The show ends January 10th, 2016. 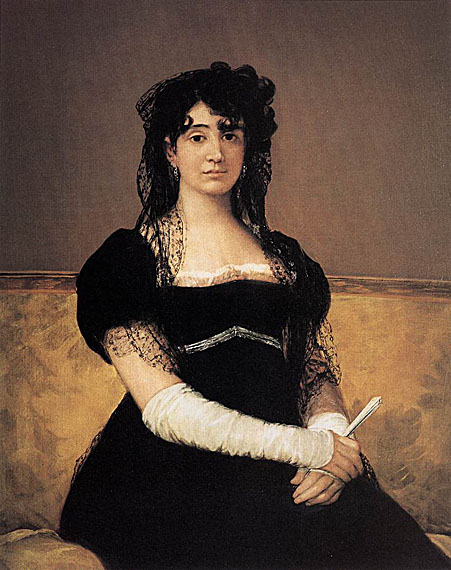 Portrait of Antonia Zarate circa 1805