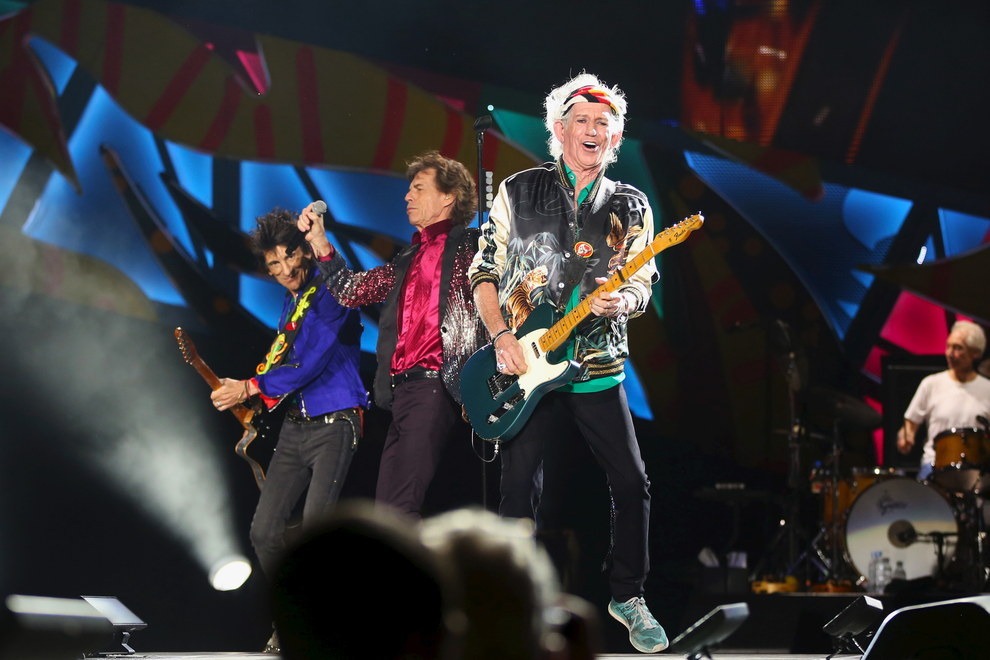 Cuba is in the news these days with visits from the Pope, Barack Obama and the Rolling Stones, all of which I hope will loosen up the one-party state and pave the way for truly democratic elections (something which few countries actually have in the world, certainly not places like China or Saudi Arabia.) However, there was something about the current media coverage that reminded me very much of the old cold-war disinformation about Cuba that used to be pumped out by the Americans, appearing last week even in papers like The Guardian and the Evening Standard, hardly hard-line anti-communist rags. One wonders where these stories actually originate. Here’s The Guardian for 25 March 2016:

In the heat of Cuba’s revolution from the 1960s to the 1980s, foreign bands such as The Rolling Stones were considered subversive and blocked from the radio. Cubans listened to their music in secret, passing records from hand to hand.

And here’s the Evening Standard from the next day:

The band’s music was banned in Cuba for many years because it was considered subversive and blocked from the radio. Cubans listened to their music in secret, passing records from hand to hand and the band built up a huge fan base on the isolated island.(26 March 2016)

Maybe the Standard just copied the story but it was the same on TV. My point is that the neither The Stones nor rock ‘n’ roll were banned when I was there in September 1974, the middle of the period described by The Guardian. Nor were they at any other time. Cubans could pick up American radio stations and even television if weather conditions were right. I was there to cover a conference on Puerto Rican Independence, ostensibly for the Village Voice, and wrote some journal notes when I got back to New York:

The conference was funded by the World Peace Council, the Soviet equivalent of the American Congress for Cultural Freedom, both of them the propaganda arms of their respective intelligence services, it was obvious that the whole thing was a propaganda exercise, paid for by the Russians that would come to whatever conclusions the Russians and Cubans had previously worked out, and that the deliberations of the conference were irrelevant. I had, however, jumped at a chance to visit Cuba even if it meant sitting through a few boring speeches. […] It was a delight just to walk the shabby Spanish streets and I often wandered around looking at the peeling buildings, getting the feel of the place. One day I was walking down Vedado, with Martin, a fellow delegate from the north of England and journalist for the Morning Star, past rows of beaten-up mid-fifties Chevrolet Impalas and Ford Galaxies in what would probably be regarded as a slum anywhere else, when three teenagers called out to us from a doorway.

Cubans say that both attract your attention and to make you shut up. When I first heard it at a Cuban theatre, it sounded as if they were hissing the villain of a melodrama when in fact it was a call for silence when Puerto Rican superstar Roy Brown came on stage.

We stood there, out in the midday sun, pondering on the meaning of these curious English words. He gave us a clue…

We spent a few pleasant minutes trading the names of English rock groups. The young men politely asked for cigarettes, gum and if they could buy our clothes. We courteously refused their offer, gave them cigarettes, shook hands and continued on our way. Apparently Deep Purple were very big in Havana.

One of the conference delegates was Peter Snape, the Labour MP for West Bromwich East. He was my age, and was somehow representing the Railwaymen’s Union at the conference. Four of us, including Peter, were strolling one evening after dinner in the park next to the Habana Libre (The liberated Hilton – where we were staying) at Calles L and 21. As we approached the ice cream pavilion a young man introduced himself. He was Fernando and he spoke English, in fact he had only recently read the Guardian newspaper of July 28th, two months old. Foreign newspapers were eagerly retrieved from waste bins or vacated hotel rooms and passed around. We asked him where we could go for a drink.

He took us to the Karachi Club where we spent about £16 on a bottle of Havana Club rum and a dozen Canada Drys. ‘You drink half the bottle, I charge you half. You drink all and I charge you for all,’ the proprietor said. It was a very straight forward sort of place. The club was very dark and hot and was decorated with palm leaves. It was hot inside and the doorman, sensibly, sat on a folding chair out in the street. Taped music was played very loud: the Rolling Stones, Barry White, Love Unlimited and Suzie Quatro, interspersed with salsa and other Cuban music.

Fernando was terribly pleased to meet people from England as visitors to Cuba at that time tended to be from East Germany and points further east. This was his chance to tell us his musical preferences: Alvin Lee, ELO, Black Sabbath, Blood Sweat & Tears, Chicago … ‘Tell me, from which country come Uriah Heep?’ He liked Zappa and the Pink Floyd and had recently paid ten pesos (£7.50) for a poster of Alice Cooper. Led Zeppelin 4 had cost him 20 pesos. I promised to send him a poster of Robert Plant. I don’t know if he ever got it. He regarded Flowers as the best Stones album, and named all the tracks, and said he was a great Brian Jones fan.

After a scholarly discussion of the Platters, Presley and Buddy Holly, he inquired ‘And what of the bomber from Liverpool?’ Up until that point I had successfully decoded the clues to his preferences, to the admiration of the rest of the party, but this time he stumped me. It turned out he was referring to Tom Jones, but overall, he did pretty well given the difficulties in obtaining information about English language music. In fact he didn’t like Tom Jones, nor Carlos Santana – ‘He is a Mexican, no?’ – nor, amusingly, did he like John Lennon. Fernando twisted his finger around his temple in the universal symbol for stupidity. ‘He tries too hard to be like us. How can he, for he is petit bourgeois?’ That cracked us up.

The Cubans heard all their rock ‘n’ roll from powerful stations in Texas, Florida and Little Rock, Arkansas. With a good antenna it was possible to even pick up Rock Concert on ABC-TV most of the year round. No-one stopped them and the tapes used in the night clubs were mostly taken from American radio stations and edited into programmes. Rock seemed to co-exist nicely with the indigenous salsa and Latin music of the island that issued from every shop and window.

The Cubans love music and though Latin music naturally dominated when I was there, as I hope it still does, we heard plenty of rock ‘n’ roll coming from people’s windows, just walking down the narrow streets. It is true that in the early days of the Revolution, the government associated rock ‘n’ roll with the values of imperialist America, and discouraged it, particularly after America both invaded Cuba and attempted to assassinate Castro, but no official attempt was ever made to prevent people from listening to American radio and TV stations. The Stones and the Beatles were never officially banned though the radio stations rarely played them. The breakthrough came in 1966 when Radio Perogresso began broadcasting the occasional Beatles record; a situation that continued throughout the sixties. By 1971 Radio Rebelde had a Beatles hour every Monday morning and evening. The Rolling Stones were played but they never entered the Cuban hit-parade as the Beatles did (with “Anna”).

The Guardian has fallen for US propaganda when it says that the Rolling Stones were ‘blocked from the radio’. It is just not true. (source: Rockin’ Las Américas: The Global Politics of Rock in Latin/o America edited by Deborah Pacini Hernandez, Héctor D. Fernández l’Hoeste, Eric Zolov. U of Pittsburgh Press, 2004).

Incidentally the Stones were by no means the first western rock band to play Cuba: Steven Stills, Weather Report, Rita Coolidge, Kris Kristofferson and Billy Joel played the Havana Jam in 1979 and The Manic Street Preachers played there in 2001. Quite likely there were more foreign players, for instance Billy Joel also did a solo gig there in the late 90s.

That’s not to say all is well on the island. When Obama flew in more than 60 people were rounded up including members of the “Ladies in White,” a group made up of relatives of political prisoners, the rapper Angel Yunier Remon, known as “El Critico,” punk rocker Gorki Águila, and the artist Danilo Maldonado, alias “El Sexto”—who spent 10 months in detention without charge in 2015 for staging a public art performance. There is still a way to go before freedom of speech and artistic expression prevail in Cuba, but they are on their way and deserve as much encouragement as possible without mindlessly parroting American dis-information.