Back in London by Virgin Airbus; the best in-flight entertainment going in films and music.  I was in time to attend the opening of the Richard Hamilton show at the Tate. How uneven he is, but how he integrated his art into the design world of everyday products like amps and a toaster, and treated political events as if he were a salon painter. His treatment of the shooting at Kent State, the arrest of Mick Jagger and Robert Fraser and, less successfully to my mind, the dirty protesters and Tony Blair, are in the grand tradition of Géricault’s Le Radeau de la Meéduse: it’s modern history painting. This was one of the stated aims of pop, as he defined it. Some of the preparatory drawings are terrific and there were lots of things I’d not seen before. The next day I did a phone radio interview with yet another St. Louis station, the ‘Let’s Talk Shop Show’ live, which was good.

On the Sunday I introduced – very briefly – the restored cut of Howard Brookner’s Burroughs movie at the ICA. Discussed it afterwards and took questions from the audience alongside Howard’s nephew Aaron who has taken charge of his uncle’s work. 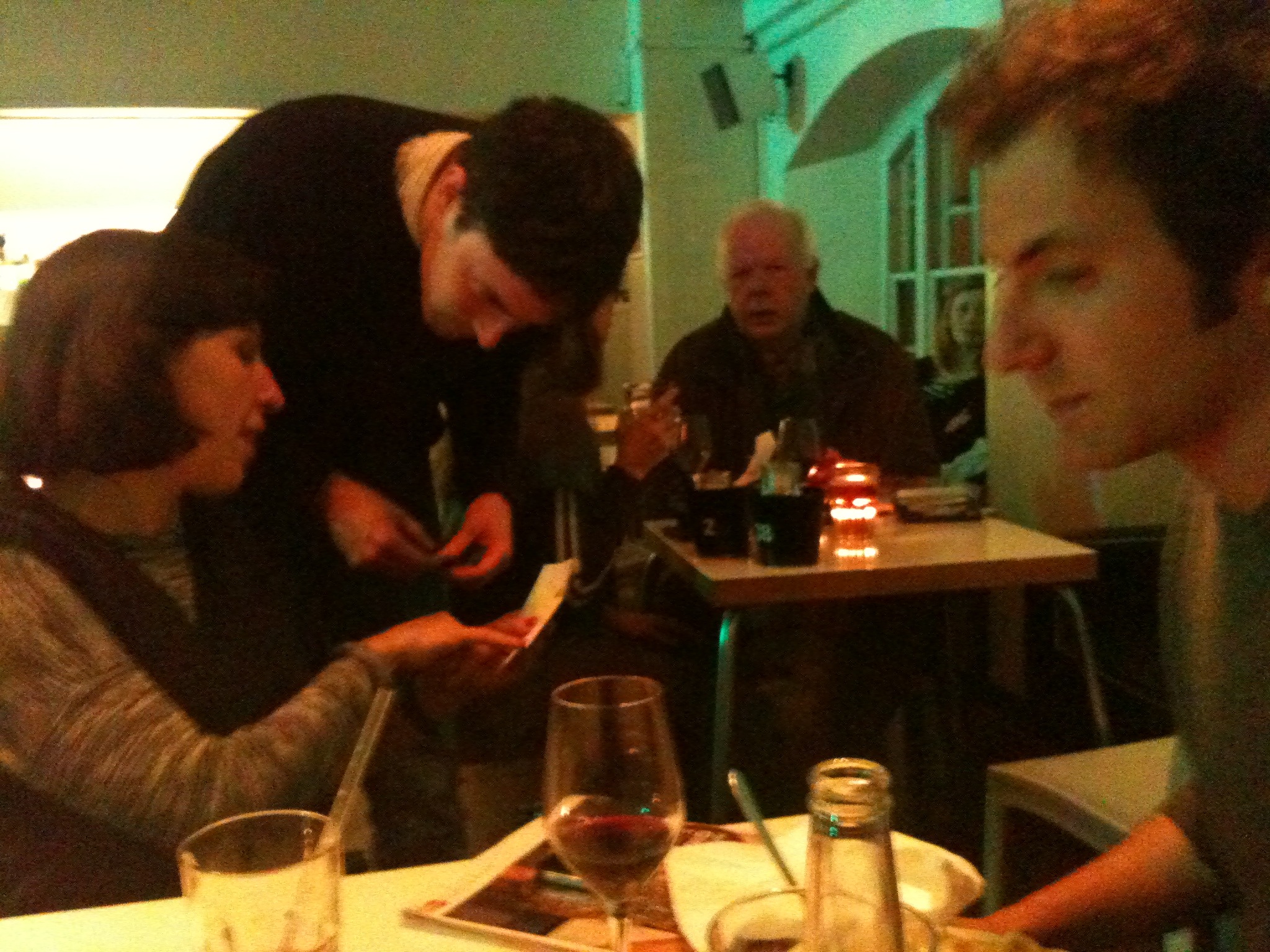 Paula and Aaron at the ICA screening of Burroughs

27 February was the launch party at Maggs Bros, antiquarian booksellers of Berkeley Square, for William S. Burroughs, a Life as it’s called in this country. It was one of those occasions where I knew more than three-quarters of the people in the room and talked so much that I could feel my voice giving up. I can’t begin to give a Jennifer’s Diary list but most of my best friends were there and it was terrific. Many thanks to Ed Maggs – as usual – to Carl Williams – as usual – and to Alan Samson at Weidenfeld & Nicolson, my publishers, for supplying some of the wine. And very many thanks to my old friend Robin Eggar who very generously bought us all dinner afterwards.

A few days later, Rosemary and I had dinner with Ed and Fran on their ketch, moored in Limehouse Basin. They managed to squeeze eight people into the cabin and to cook for us. Tottered home, managing not to fall into the dock. I had done a pre-recorded ‘Newstalk’ show for Irish Radio that lunchtime and the following Saturday, did an on-stage interview at the Wapping Project which, confusingly, is now at 65a Hopton Street, SE19, just round the corner from Tate Modern, forced out of trendy Wapping by rising costs but still enthusiastically run by Jules Wright. On Thursday, March 13, Michael Horovitz and I did a sold-out on-stage conversation at Waterstone’s in Gower Street that was a lot of fun. I am constantly surprised and pleased at Michael’s consistency and how he always holds on to his radical sixties view-point – which I hope I also do. And so at the talk he praised Burroughs for much of his work but criticized him for his misogyny and his obsession with fire-arms. There were some good questions from the audience.

In many ways the most interesting event was at the Photographers’ Gallery on March 20th to accompany the final days of their exhibition of William Burroughs’ photographs. Andrew Wilson, writer, curator of Modern and Contemporary art at Tate Britain, and I, held a conversation about Cut-Ups, with particular attention paid to Burroughs. Andrew set Cut-Ups in context with a brief history of collage as one of the 20th century art’s most important innovations and described parallel movements and avant-garde activities of the time. I gave a brief description of the chance discovery of the Cut-Up technique by Brion Gysin and Burroughs’s immediate use of it. Then we discussed its use in literature and how it was quickly applied as a technique to both tape recording, photography and film, with particular attention paid to Burroughs’ photo-montages which, by strict definition, are not collages as he didn’t stick them down but photographed them, moving the elements around and taking more photographs so that the photographs are the only record of them, and are the ‘artwork’ in themselves. We apparently sold-out the tickets, which was gratifying. 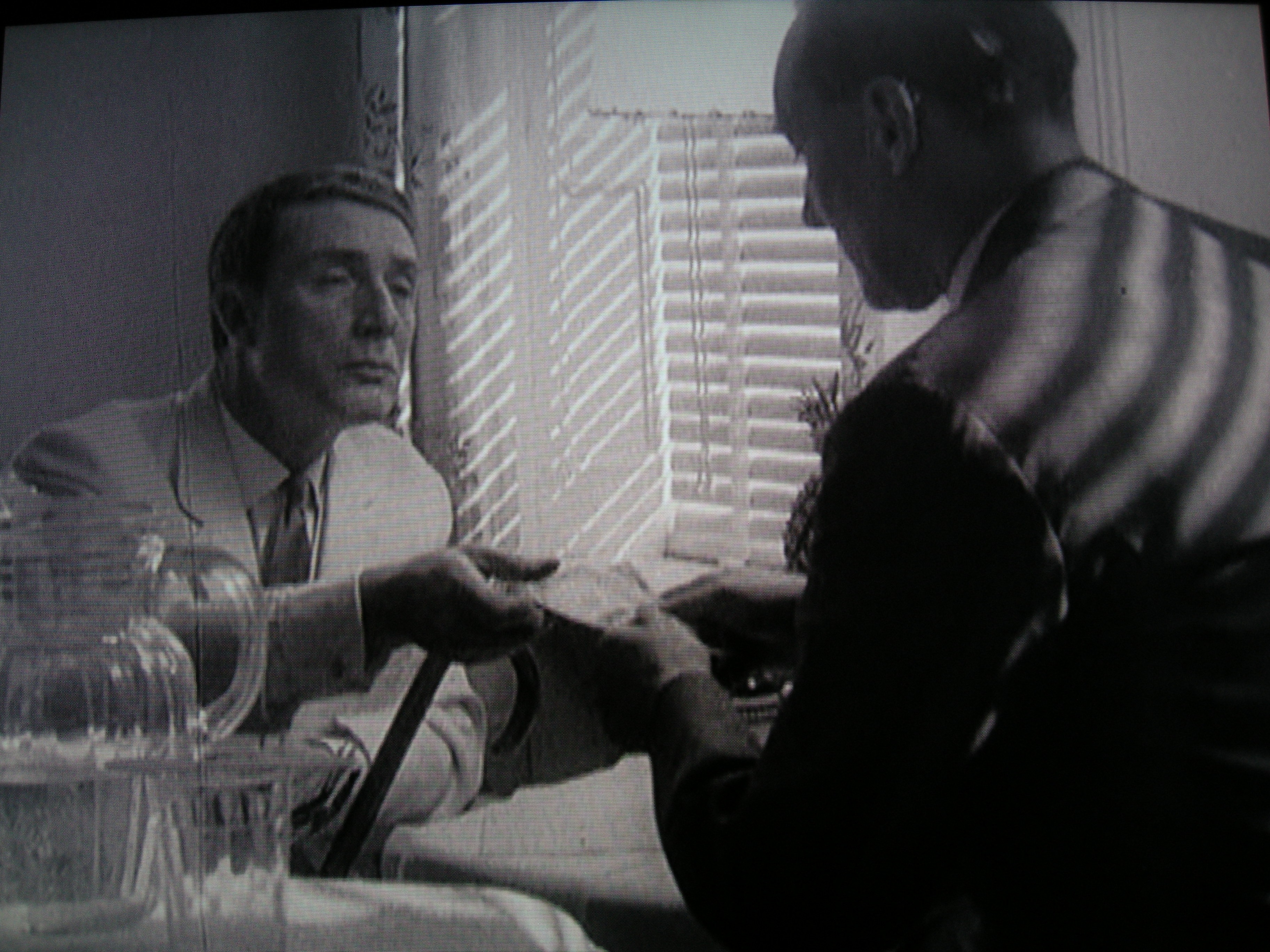 There were some interesting questions from the audience including one from someone who asked how much Burroughs had been influenced by Doctor Dent, the man who cured his eukodol addiction in the mid fifties. I endeavored to explain how Dent had been Burroughs’ first publisher: he was the editor of the British Journal of Addiction and printed Bill’s ‘Letter from a Master Addict to Dangerous Drugs’ in 1956. He also introduced Burroughs to the apomorphine cure, which Burroughs not only used and swore by, but also used as a metaphor in some of his writing. Dr. Dent became a good friend of his. The questioner came up to me afterwards and explained that he was Dr. Dent’s grandson and was researching his grandfather’s work.  I wish I had known about his papers when I was writing the book. 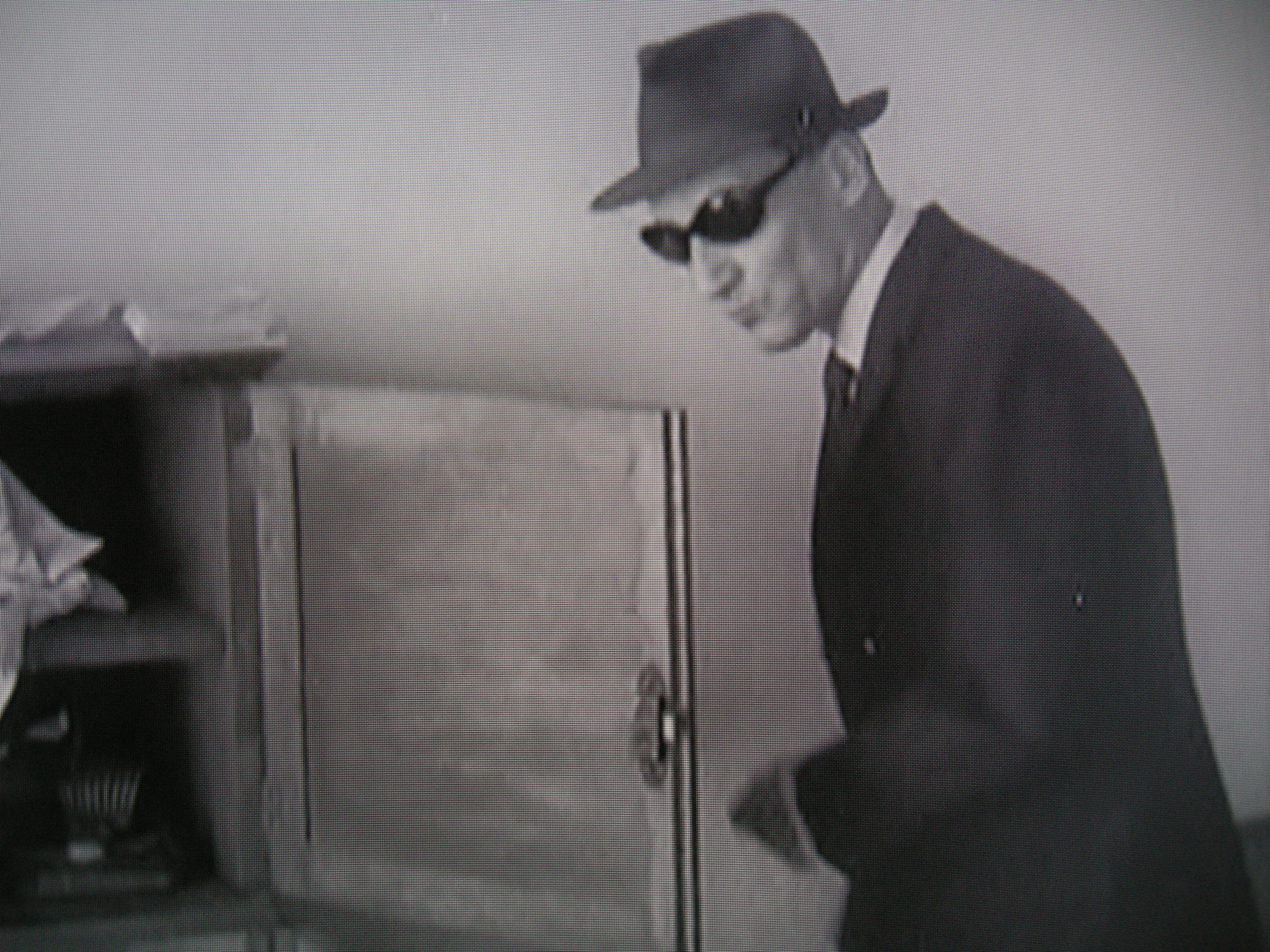 Bill hides the cut-up formula in his safe

Another person present was William Hopkins, known to Burroughs as ‘Willie John’, who was a friend of Bill’s in London in the early seventies. He lost all his photographs of his early life and therefore was astonished when walking around the Photographers’ Gallery Burroughs show to find a picture of himself from 35 or more years ago, looking down from the wall, described as anonymous. And in the bookshop, there was another, different print. It is extraordinary that, when you have lost every image of yourself, that the great cutter-up of images of images should have taken the only ones that have been preserved. I will endeavor to get him prints of all three pictures that Bill took of him. Once again, I wish I had met him before my book was finished but this is always the case. You send a book out and then all sorts of people emerge by chance whose recollections would have been invaluable. The same happened to me with my Beat Hotel book. Only after it was published did other hotel guests start to appear. ‘Twas ever thus! 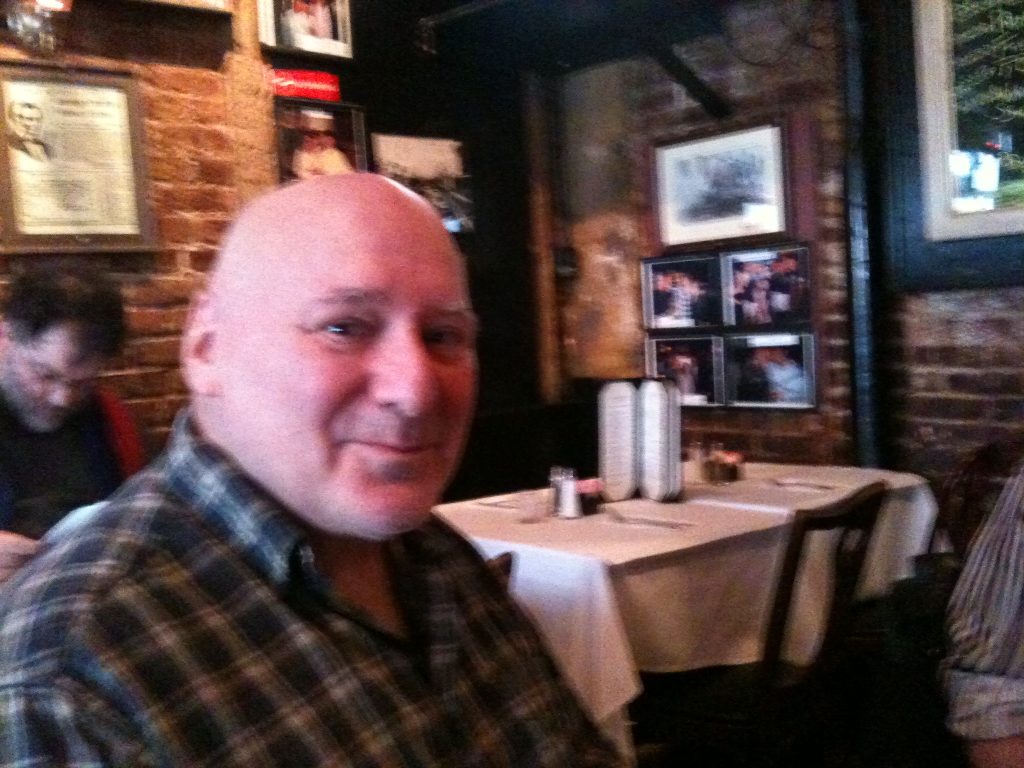 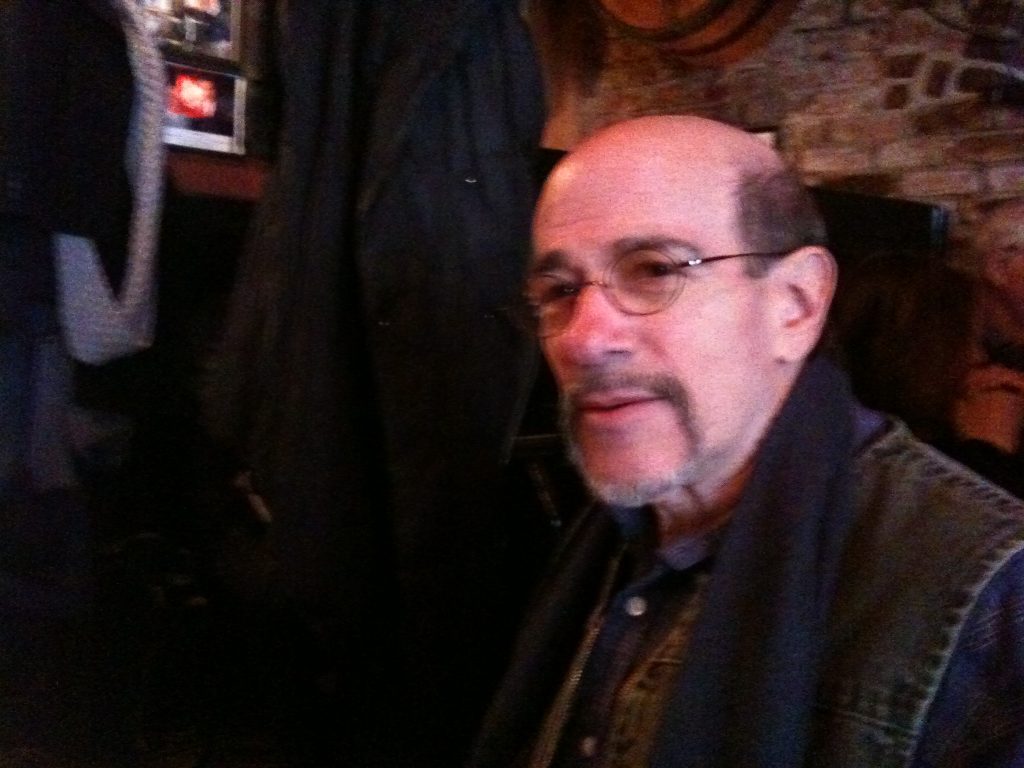